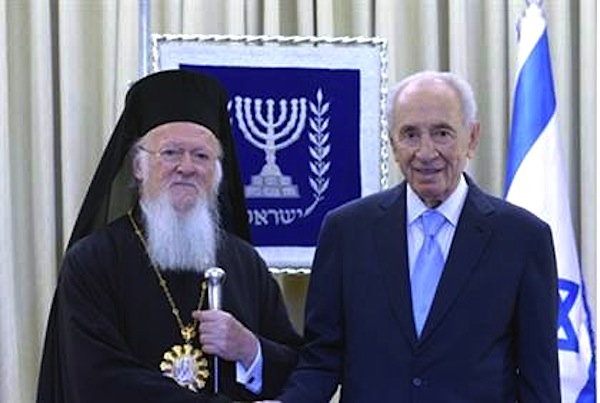 Ecumenical Patriarch Bartholomew, currently on a visit to the Holy Lands, on Tuesday had meetings with the Israeli and Palestinian leaderships.

During the Patriarch’s visit, Israeli President Shimon Peres and Palestinian President Mahmoud Abbas announced their decision to visit the Vatican together on June 6, accepting an invitation extended to them by Pope Francis from Bethlehem on Sunday. The two leaders are to pray with the Pope for a resolution of the Middle East problem and for a lasting peace.

Greeting the Ecumenical Patriarch at his offices, Abbas said the Patriarch’s visit to the Palestinian Authority was an honour and that he felt very proud. He also referred to the significance of the meeting between Patriarch Bartholomew and Pope Francis in Jerusalem, praising their efforts for the resolution of various conflicts.

The Ecumenical Patriarch expressed great satisfaction that the two leaders had accepted the Pope’s invitation and expressed hope that the meeting would lead to positive results. “We will be with you with our prayers,” he stressed.

Patriarch Bartholomew – the ‘first among equals’ in the Orthodox Church – briefed Abbas on the Joint Declaration signed with Pope Francis and their joint efforts to eradicate religious fanaticism, fight racial discrimination, promote respect for human liberty and personality and to protect the environment.

Bartholomew also referred to Ecumenical Patriarchate’s initiatives for an understanding with Islam and Judaism and stressed that the dialogue with these religions did not cover only matters of theology but also issues concerning contemporary societies.

The Ecumenical Patriarch had earlier visited Peres, whom he also congratulated for accepting the Pope’s invitation.
(source: ana-mpa)

US to Sanction Cuban Security Forces After Protests