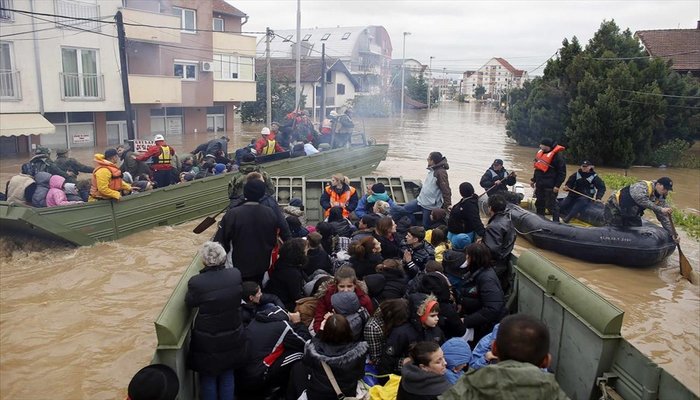 Several campaigns have been organized in Greece to help the victims of the catastrophic floods that hit Serbia and Bosnia.
More than 20 tons of humanitarian aid have already been collected in the northern Greek municipality of Katerini for Thursday delivered to the flood victims in Serbia and Bosnia. The aid campaign will be accompanied by members of the Voluntary Action Group of Pieria and Médecins du Monde.
The municipality of Volvi, in Thessaloniki, also launched a campaign to collect first-aid products at the city hall of Stavros and at the former city halls of Asprovalta and Vrasna.
The youth football academy of Pylaia suburb, in Thessaloniki, Shooters Academy, has also started to collect clothing, medicine and dry food to help those in need in the flood-hit regions.
The past few days Serbia and Bosnia have been hit by catastrophic floods, the worst in the Balkans’ modern history. Thousands of residents were trapped in their houses, most of which have been severely damaged. Furthermore, many of the locals were injured and about 50 people have already lost their lives due to the heavy floods. Many villages and towns have also been isolated, while power supplies and transportation have been cut in many regions of the two countries.
Humanitarian aid missions and campaigns have been launched in many countries and rescue teams have already been sent to Serbia and Bosnia to assist the local forces locating and rescuing the victims.