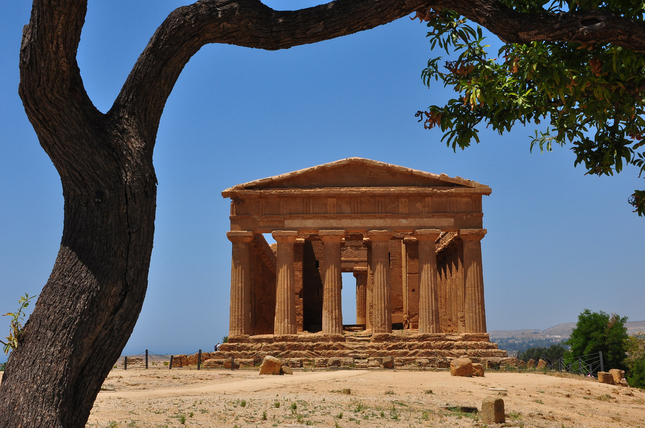 The presence of Greeks in southern Italy dates back to ancient times, as revealed by many archaeological discoveries and a Greek dialect which is still spoken in some areas. Regions of southern Italy and Sicily were settled in the 8th century BC by ancient Greeks who founded large colonies. Today, visitors can admire many of the ancient buildings and towns that form the remains of the Greek colonies, which have been preserved and protected.

Valley of the Temples in Agrigento, Sicily: The Valley of the Temples, (Valle dei Templi) is a large religious complex where impressive Greek temples were built during the fourth and fifth centuries BC. The monument is located outside the town of Agrigento in southeastern Sicily.

Paestum, south of the Amalfi Coast: Paestum is the northern point of “Magna Graecia” or “Greater Greece.” It has three of Italy’s most complete Doric temples. The area is included on the UNESCO World Heritage List of places of outstanding cultural importance.

Neapolis and Ortygia in Syracuse, Sicily: Syracuse was founded in 734 BC and was Sicily’s largest Greek colony. The remains of the colony which can be seen at the Archaeological Zone of Neapolis and the island of Ortygia, include a Greek theater, the ruins of temples, and the base of the altar of Zeus Eleutherios (“The Liberator”).

Greek Theater in Taormina, Sicily: The Greek theater in Taormina was built in the third century BC. Today it is still used for summer performances as it has excellent views over the sea and outstanding natural acoustics.

Grecia Salentina, Greek Towns in Puglia:  The Greek towns in Puglia still maintain Greek elements as a Greek dialect is still spoken and taught in schools. Many of them have interesting historic centers and castles.