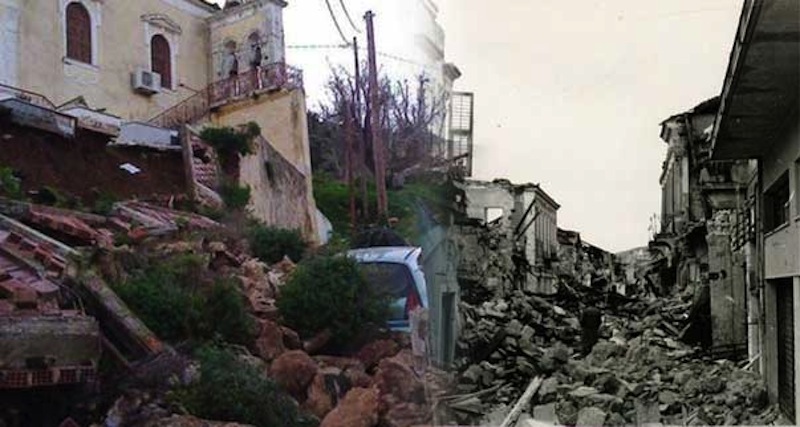 For the third day in a row, the Greek island of Kefalonia has been hit by continuous earthquakes, something that brings back memories of 1953 when the whole island was devastated by three strong quakes. Many locals live with the fear of a possible repetition of 1953 as the coincidences are many.
According to the Institute of Geodynamics in Athens, Greece, more than 130 quakes with a magnitude of over 3 have shaken the island. This seismic activity has turned the days and nights of the locals into a nightmare.
Back in 1953, within 4 days, from August 9 to 12, the island was struck by three great earthquakes, all measuring above 6 on the Richter scale (6.4 on August 9, 6.8 on August 11 and 7.2 on August 12) and caused the death of 455 people. In addition, the event caused widespread damage on the infrastructure throughout Cephalonia and Ithaca.
This is the reason why the seismologists avoid officially announcing whether Sunday’s earthquake was the main one. In other words, the fact that this region is experiencing earthquakes of this magnitude has made scientists cautious over their estimations.
The Greek professor of seismology, Gerasimos Papadopoulos says that on Wednesday “we will be able to make a final and precise estimation on Cephalonia’s seismic activity” while Kostas Makropoulos, also a professor of seismology, stated that “we must wait for a week to pass to say with 99 percent certainty that this was the main quake.”
On the contrary the professor of Geology and Vice-President of Earthquake Planning and Protection Organization, Efthymis Lekkas appeared more reassuring. He explained that “while no scenario should be ruled out, the genesis mechanism that brought the two quakes — the one of 1953 and the one this past Sunday — is different as the faults are not the same. One is located in the east part of the island and the other is located west of Palliki region.”
Meanwhile, Mr. Lekkas warned the Island’s residents that the forthcoming weeks and months will be a tough period for them as a barrage of aftershocks with an average magnitude above 4 is expected.