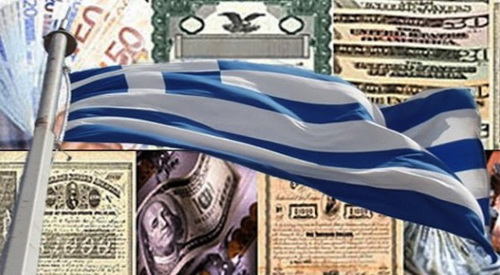 “From the beginning, our state had no other choice than to live on credit. We were born in debt.”
– Gerassimos Notaras, head archivist, historical archive, National Bank of Greece

The debt history of Greece begins well before an official Greek state was created.
The preparations for the Greek War of Independence saw two foreign loans being contracted with Britain. From a total of 800,000 pounds negotiated, the Greeks only got 300,000 pounds after commissions, interest rates and other charges were subtracted. As security for the repayment of the loan, the Greek side had to mortgage all public lands and all public revenue.
In 1827, independent Greece’s first governor Ioannis Kapodistrias asked the European allies for a new loan so as to meet the repayment of a part of the previous loans and to help the recovery of the Greek economy. His request, however, was turned down and the Greek government was forced to declare bankruptcy in the same year.
At the time, Greece was reduced to a handful of provinces and islands around Athens and Peloponnese. Its situation was similar to today, as Greece was shut out of capital markets. Its “spreads” would skyrocket with the slightest rumor, calculated on the backs of envelopes by money lenders in muddy back alleys at the foot of the Acropolis.
Back in the 19th century, Germany, today’s thriving power, was not among the money lenders. The debts were signed by France, the Netherlands, Russia and the U.K..
The Bavarian King Otto who was brought to Greece as King of the Hellenes by the “protecting powers” Britain, France and Russia, contracted new loans of 60 million French francs. The first two installments were mainly used for repaying the previous British debt and maintaining the Bavarian army and bureaucracy. However, as the economy couldn’t recover, the three powers refused to pay the third installment. Eventually Otto was forced to declare bankruptcy.
The reign of Otto also saw the first financial restructuring of the Greek state. The “phoenix,” the first Greek coin, was demonetized and replaced by the “drachma,” which would be used for 169 years until replaced by the euro.
During the following decades, despite developments in shipping and industry, the public debt continued to grow, with the compensations paid to the Ottomans for ceding Thessaly and Arta further increasing it. On October 30, 1893, the Greek PM Charilaos Trikoupis stood before parliament and exclaimed the historic sentence, “Unfortunately, my dearest gentlemen, we went bankrupt.” It was the third consecutive bankruptcy for Greece.


After the unsuccessful Greek-Turkish War of 1897, Greece was forced to pay war reparations and got itself under international financial control.
From 1824 to 1897 Greece had contracted 10 foreign loans totaling 770 million francs, receiving though, only 464.1 million francs. The rest of the amount was kept back for paying the issue price of the loans and other commissions.
At the beginning of the next century PM Eleftherios Venizelos, despite his successes in foreign politics, took up four external loans totaling 521 million francs. The new loans were used for servicing existing external debt, for participating in the Balkan Wars and for incorporating the new territories claimed after the war.
The Asia Minor catastrophe in 1922 forced Greece to accept 1.5 million refugees from the territories along the eastern side of the Aegean Sea. In 1929, the Great Depression caused the fourth Greek bankruptcy as the country was relying mainly on foreign capital, thus making it vulnerable to international financial upsets. At the time, the Greek public debt totaled 286.8 billion francs.
During the Second World War Greece was conquered by Nazi Germany. Its productive structures were destroyed and the resources were over-exploited. As the Greek gold reserves had been smuggled out of the country prior to the occupation, the devaluation of the national currency dropped daily and was noticeable even in small transactions. In Athens, a coffee had a cost of 1 million drachmas. After the end of the occupation one pound was equivalent to approximately 7 billion drachmas.
An occupation loan of 400 million marks that Greece was forced to provide to Hitler for financing his military operations further burdened the debt of Greece. It is noted that the war reparations which were paid to Greece by Germany after the war, never included this loan. Until today, the German government claims that this loan has been already repaid and is not up for discussion.
By the end of the Second World War Greece had to deal with a Civil War and excessive military spending, the third largest in Western Europe. Greece joined the Marshall Plan but the funds were unable to generate economic growth due to the ongoing domestic conflicts, while a part of them was used for armed battles. Nevertheless, the post-war Greek governments managed to settle up to 90% of the pre-war external debt amounting 6.41 billion drachmas.
During the 50’s and 60’s, Greece was able to improve the life quality of its citizens and invest in big infrastructural projects, while demonstrating the second fastest growth rate after Western Germany. The “miracle of the Karamanlis’ governance,” as the 8-year administration of New Democracy politician Konstantinos Karamanlis went down in history, was followed by the Greek regime of the colonels, the 7-year military junta. This period coincided with the shift of the Greek economy from agricultural to industrial production and with more foreign capitals flowing into Greece mainly by the U.S..
In 1979, Greece acceded to the European Economic Community, the forerunner of the modern European Union.
The nationalization of many highly profitable industries initiated by the socialist government of PASOK in the early 80’s, led to the inflation being reduced by 11% within 9 years. In 1990, though, inflation rapidly increased again reaching 20.4%. The public debt was increased by 30%, climbing to 110% of the GDP.
In 2001 Greece joined the euro. Nowadays, the Greek state has a public debt of 436 billion dollars, or 161.3% of the GDP.