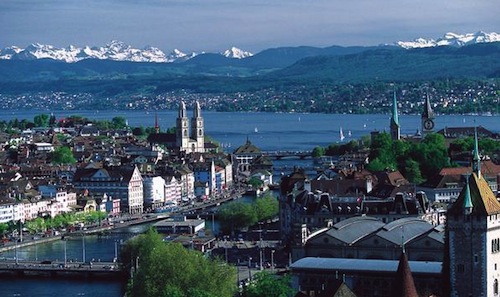 Switzerland is a federal state in the west of Europe, an economical and commercial crossroad of international caliber. Many Greeks are currently living in Switzerland and the two countries have a long interrelated history behind them.

The first governor of Greece, Ioannis Kapodistrias contributed to the birth of the country. On January 17, 1817 he received Swiss citizenship in recognition of his contribution to the creation of Switzerland’s federal system. Furthermore, he helped unite the country and make it independent, divided in 19 autonomous states called cantons.

Many Greeks have decided to try their luck there, especially in recent years when the Greek economic crisis was at its worst. They move there to find a better work environment, better work opportunities and even better living standards.

According to data provided by Jorgos Brouzos, journalist in the Swiss newspaper Handelszeitung, in 2010 the number of permanent Greek residents in Switzerland reached 6,808 , in 2011 it rose to 7,521, while in 2012 they amounted to 8,678.

Overall, there is a small but significant increase of 2,000 Greeks who permanently reside in Switzerland and have been absorbed in various professions, such as medicine, banks, universities, organizations in the European Union and the UN, where they excel and hold prominent and senior positions.

The Greeks of Switzerland, apart from their entrepreneurial activity have organized many associations in order to maintain Greek traditions.

The Vaud Parliament President who is of Greek origin, Pascal Broulis told Greek Reporter that there is a Greek association in Lausanne called “Hestia.” This association organizes cultural events and its main concern is to contribute to the integration of Greeks in the city. Furthermore, Broulis added that many of the multinational companies based in Lausanne (e.g. Nestle) have Greek employees. He also mentioned that there is the possibility of absorption of young and qualified people, noting that in fact the number of Greek researchers at the University of Lausanne (Ecole Polytéchnique Fédérale de Lausanne) has increased.

Looking back we can see that the Greeks in French-speaking areas have integrated differently than in the German-speaking part of the country. Specifically, in the German-speaking north Switzerland, most expatriates came in previous migrations. In French-speaking Switzerland Greek expatriates mostly came from wealthy families who arrived many years ago and settled their own business in the area.

The history between Greece and Switzerland, and the recognition of the Greek Diaspora assist in creating a philhellenic environment that attracts investments, partnerships and offers great job placement and career advancement opportunities with the corresponding salaries.