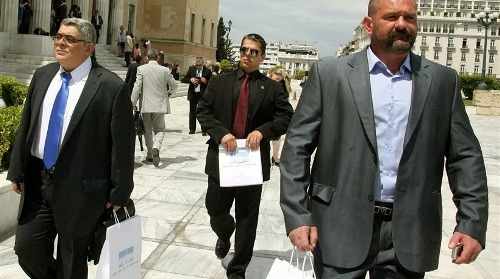 Greece’s Financial and Economic Crime Unit (SDOE) has located two offshore companies in Cyprus which belong to a member of Golden Dawn. This member also appears to be connected with the funding side of the party. SDOE has also found 150,000 euros in a bank account of Golden Dawn MP, Yiannis Lagos, who is currently in detention and who previously declared that he was unemployed.
These revelations add a new dimension to SDOE’s investigations in terms of the financial transactions and sources of the party’s funding. Intensive inquiries began last Autumn after the murder of 35-year-old Pavlos Fyssas.
The results of analysis of files on personal computers belonging to three Golden Dawn MPs in detention – Giorgos Yermenis, Panayiotis Iliopoulos and Efstathios Boukouras – are expected within the next few hours. It is believed that some of these will provide authorities with valuable information regarding the inner workings of the organization.
Furthermore, the results of the investigations by the Hellenic Police regarding the connection between the businessman Anastastios Pallis and the “armory” of Golden Dawn, is expected to be made public shortly.
According to Vima, offshore companies in Cyprus appear to belong to a former insurance broker who was involved in the management of the party’s funds along with another relative. These companies were established in 2004 before the individual became involved in Golden Dawn’s activities.
Regarding the 150,000 Euros found in Lagos’ bank account, according to the Greek Ministry of Finance in a recent asset assessment, the MP declared only one landed property of 50 m², while his bank accounts all had less than 7 euros. According to Lagos, this money was from an inheritance he received in 2005.
The investigation of financial transactions and bank accounts of about 35 Golden Dawn members continues. The Greek Ministry of Finance has stated that, “so far, we have not identified amounts associated with illegal funding of the party. However our investigations will move on to others potentially associated with suspicious transactions.”