GRNews
GreekReporter.comLifeeventsGreece's President on Telendos, Pserimos and Kalymnos for Epiphany

Greece's President on Telendos, Pserimos and Kalymnos for Epiphany 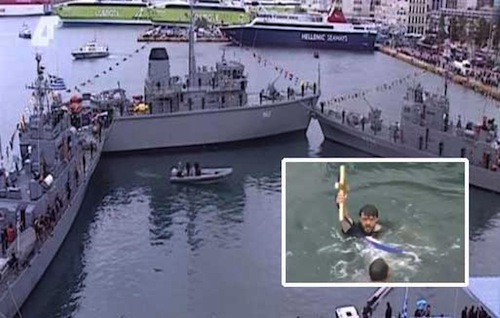 Despite the cloudy weather, Epiphany glorious manifestations took place in all regions of Greece, from Athens, Thessaloniki and Piraeus to the smallest coastal village.
In Athens, the blessing of the waters ceremony was carried out in the city reservoir, while in Piraeus it was held in front of Saint Spyridon church. In Thessaloniki it took place close to the coast at Hagia Sophia Church.
Epiphany was marked by a traditional religious ceremony at Piraeus, where gay couples protested against the port city’s ultra-conservative bishop, Seraphim.
According to newspaper Efimerida ton Syntakton, several gay couples kissed as Seraphim conducted the blessing of the waters, throwing a crucifix into the sea. They also handed out leaflets which read, “Love is not a sin.”
Seraphim is known for his homophobic and anti-Semetic statements. He recently opposed plans to extend legislation allowing unmarried couples to have their partnership’s legally recognized as same-sex couples.
He said that any other relationship, barring that between male and female, “is an unnatural aberration not even observed in animals.”
Greek President Karolos Papoulias visited Telendos, Greece, for the Epiphany celebration, accompanied by Shipping Minister Miltiadis Varvitsiotis. They attended the blessing of the waters ceremony and immersion of the Holy Cross, before visiting the islands of Pserimos and Kalymnos.
Greek Prime Minister Antonis Samaras attended the blessing of the waters in the city of Kalamata in the Peloponnese, while Defense Minister Dimitris Avramopoulos visited Kastelorizo, where he attend the Epiphany and immersion of the Holy Cross.
A 60-year-old woman jumped into the water during the traditional religious ceremony celebrating Epiphany on the Dodecanese island of Rhodes on Monday, allegedly in protest at the financial problems she and her family were facing.
According to reports, the woman, who was standing near the area reserved for officials during the ceremony at the port of Mandraki, threw herself into the water fully clothed when the island’s bishop, who was blessing the waters, threw the crucifix into the sea.
[youtube]PfGxMFRx92I[/youtube]