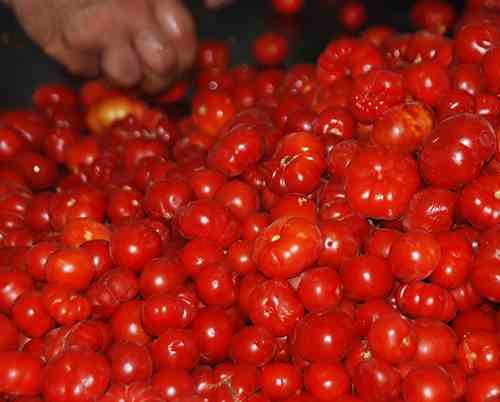 The Greek island of Santorini isn’t just famous throughout the world for its beauty, but also for its cherry tomatoes (Tomataki Santorinis), which grow exclusively in the eastern Aegean island’s volcanic soil. The meager rainfall, wind and high temperatures encourage the growth of the tiny tomatoes which have a very concentrated flavor compared to other varieties. In fact they are so small that most visitors find it hard to believe that are indeed tomatoes rather than cherries. The variety is very popular and is used in many dishes and desserts.
The European Commission has awarded the term “Tomataki Santorinis,” a Protected Designation of Origin (PDO) and Protected Geographical Indication (PGI).
It is said that an abbot from the Capuchin monastery on the island of Syros in the Cyclades, brought the first cherry tomatoes to Greece in 1818. However the Santorini variety began to be regularly cultivated in about 1875.
The European Commission has also approved the inclusion of two other products. A creamy-white cheese made from cows milk in the United Kingdom, “Yorkshire Wensleydale,”  and a cream and pistachio sweet pastry from Gaziantep province in south-eastern Anatolia, “Antep Baklavasi” or “Gaziantep Baklavasi.” This is the first Turkish product to receive protected status from the European Union.
These three will be added to the list of more than 1,200 already protected products.