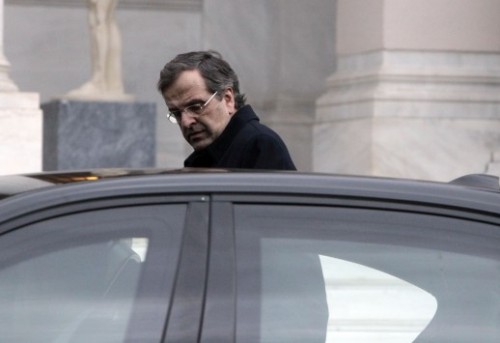 Greek Prime Minister Antonis Samaras was outraged by the Michalis Liapis incident. Liapis, the former New Democracy MP as well as  the former Minister of Transport, was arrested for driving an uninsured car with fake plates and without driving license. Maximos Mansion’s officials expressed their frustration towards the reckless action of the former Minister.
The Greek Prime Minister has ordered the Greek Minister of Justice, Charalambos Athanasiou, to not be lenient with cases of MPs that are breaking the law like Liapis. Samaras made it crystal clear to the Minister of Justice that the MPs who violate the law would have no more parliamentary privilege.
However, Liapis will stand a trial Thursday. The former Minister will face criminal prosecution with charges of false declaration and forgery while having to pay a fine for his uninsured car and because he had tinted windows without a license.
Meanwhile, New Democracy’s officials were furious with Liapis. Both Andreas Papamimikos and Manolis Kefalogiannis strongly criticized the former Minister.
Andreas Papamimikos, the secretary of New Democracy, stated that, “Mr. Liapis irresponsibility caused the worst impression, and now he will face justice as any other citizen, without any privileges.” New Democracy’s spokesman, Malonis Kefalogiannis, commented from his part that, “Michalis certainly hurt us with what he did, but he is no longer a member of our party.