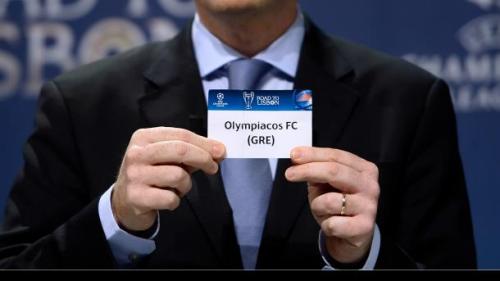 The knockout stage of the 2013/14 Champions League campaign has finally taken shape, with only 16 of the continent’s finest left in the hunt for Europe’s top prize. The event took place in Nyon of Switzerland, at 1pm. The Greek representative, Olympiacos, handed a tough draw in Champions League knockout round of 16.
The Greek team will have to face the very strong side of Manchester United in a double encounter. The first leg will be played at Karaiskakis Stadium on Tuesday, February the 25th and the second leg at Old Traford on Thursday, March the 19th. The “Red Devils,” unlike Olympiacos, have a history in the competition having lifted the famous Trophy for three times. The two sides have been met again in the past. In four Champions League clashes against United, Olympiacos has never won. In fact, they manage to score their first goals to the Red Devils in their most recent fixture, a 3-2 loss at the Karaiskakis Stadium in 2002.
The English giants have never scored fewer than two goals in any individual match against Olympiacos but their attack hasn’t been consistent this year. David Moyes’ side may not have been having the best year, as United struggles without Sir Alex Ferguson, but they are still a big obstacle for Olympiacos and the odds are against the Greek side for sure.
In England, they say that “the draw was perhaps kindest to David Moyes’ Manchester United, a rare bright spot for them in a troubling campaign to date.” They believe that the Red Devils handed the easiest draw compared to the pairings of the other English Clubs. In England, they see the encounter against Olympiacos as a very simple task and as not much of a challenge.
In general, Monday’s draw in Nyon, Switzerland, threw up several fascinating encounters, such as Arsenal’s showdown against Bayern Munich and Manchester City’s clash with Barcelona.

Champions League Round of 16 Fixtures