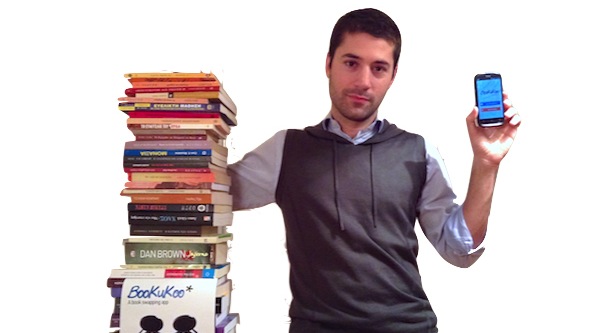 Panos Kouretas is a graduate of the Department of Computer Engineering and Informatics at the University of Patras, he attended Harvard University for his postgraduate studies (Master of Science in Engineering Sciences) and then worked in Tokyo and Hong Kong. The 31 year-old is currently working in a Greek start-up company, and wants to urge everyone to bring ideas and new technological solutions to Greece. Kouretas came up with an idea of his own, called the Bookukoo!
Bookukoo is a mobile application for either Android phones or iPhones, that also operates normally on tablets (iPad, iPad mini etc.). The application is used for recycling books (yes, you read that right!). It’s a non-profit tool for any bookworm regardless their reading preferences. Its intention is to strengthen the communities of the Hellenic Diaspora, creating a virtual library for all Greeks wherever they are! You can look for Bookukoo, in Greece and the UK to recycle your library!
What exactly does Bookukoo do?
It’s an application for Android mobile devices and iPhones, which allows its members to find other members in order to easily and inexpensively exchange their books.

How did you come up with the idea?
Two years ago, when I did my military service, I spent several hours locked in a room after I had been entrusted to monitor the camp surveillance cameras. The truth is, is that during those hours I was reading rather than watching! I read my books and then even though I many times had every intention to give them to someone (because I think the book should be read by many people), I didn’t have a way of doing so. I also wanted to exchange books, not just give them away. Even though I was pleased to give my books away, I would be happier if I could get one in return.
Does the application name mean something?
I wanted the name to be small, pretty, playful and reminiscent of the word book. That’s why our name starts with the word “book” and just continues with a funny ending the “kukoo.” For those who know me, the Japanese influence, coming from my time spent in Tokyo is evident.

So your idea came true!
The idea was that the application would be for cell phones, which are portable just like books. Everyone has a cell phone, while computers are not a given for everyone. Maybe I got the idea because the only thing I had with me at the military camp was my phone. I wanted to start from the beginning, from A to Z because I’ve met several people who have cool ideas but don’t always finish them. It was a difficult process. You have to believe in your goal and spend a lot of time working on it, even if you only taking small steps. Personally I had to go back to my studies at the Polytechnic School and my years as a programmer.
How much time did you spend on the project daily?
It’s difficult to give an average of hours but it took me about 9-11 hours a day for several months. People dealing with technical issues, know that if a problem arises, you have to work on it until it’s solved.
Did you create it all by yourself?
I created a piece of the application for Android phones, I made the initial application database and in general the main part was made by me. Later, however, I needed the help of a freelancer to do the graphic design, Designer Petros Dimitriadis and iPhone Developer Petros Hatzipapas helped me piece together the iPhone application. Amalia Stoumbou provided two very nice bookmarks and the Bookukoo poster, while Dimitris Diakoumopoulos helped launch the first promo video. Also, an art director — graphics & communication specialist Zoe Roussos — was added to our team. She was in charge of promotion through Facebook. In any case, without the help of the people at the Informatics Company, Indice, it would be impossible to create Bookukoo! During the software development period Indice provided me some space in their facilities and was always willing to give me their knowledge and years of experience, whenever a technical problem arose!
How does the application work?

The Bookukoo pulls information from the official site of the Greek National Book Centre, biblionet.gr and has access to any book that is listed there (scientific, philosophical, literary, etc.). Users can upload any book as long as it has an ISBN code so it can be identified and its information can be pulled from the biblionet.gr website.
The process is automatic and rather simple for the user. If I decide to add an available book, I just turn on my cell phone, go to the appropriate application screen, add the book, press a button and the cell camera scans the barcode on the back cover of the book. Through this code all the books’ information is downloaded on the cell. No need for the user to write the name of the book or author or anything.
This makes the application user-friendly and more functional also preventing the use of the “greeklish” language or any simple mistake that could be made while typing and choosing categories and genres.
How does the book swap actually work?
It’s a hand in hand exchange because we need “real” books made of paper. We can’t exchange e-books. It would be illegal while a “real” book cannot be copied. However to assist Bookukoo users, each of them must state their location so everyone can first look within their own neighborhood. There will be a map that shows which users are nearest to each other and what kind of books they are offering. So the logic is that you choose users who live near you and ask them for books. If you’re looking for a specific title that is farther away, then that would be a problem that the users have to solve themselves.

Who is the applications’ target group?
The Bookukoo vision was not a business idea. I did it in an attempt to fulfill a personal need to exchange books with people. And because I’m a bit stubborn as a person, I decided to go all the way…..I would say there are three basic target groups for this application:
1. Students who do not have an income but have books. I remember when I was at the university I was often forced to buy books in order to pass exams and then they were of no use, they just got stacked in the library.
2. Bookworms: It’s clearly book lovers, who face large costs annually. A bookworm is someone who reads more than 20 books during a year and according to official data, the average value of a book in Greece is around 17 euros. So we are talking about more than 300 euros per year! They could certainly give a part of their existing library and replace it with book they have not read.
3. Families with young children: I want to believe that once families realize the power of Bookukoo, they will embrace it! Books for young children have something like an expiration date, after the child grows up and has no desire to reread the same books. It’s like children’s clothes, you grow out of them! It won’t seem like such a waste, when you know that the book you want has already been bought by someone near you and is available to you through this application.

What do you say to people who don’t like giving away their books?
Personally I like giving most of my books to other people because I want them to love them as much as I do. I don’t want to just put them in a bookcase to gather dust. To those people I say that the Bookukoo application is based on a point system, which counts how many books you have given and also gives users the chance to take books without having first given any. New members can take two free books before having to give theirs to someone else. But to continue as an active member, you must give to the community (but not necessarily the same person).
Why download the Bookukoo?
Firstly, because you win something and secondly because you are doing something good for others! With its motto “Read it, Swap it” which means “Read More, Spend Less,” Bookukoo gives you the opportunity to read more books with less money, but also to offer something to others….to another reader and to the environment. We shouldn’t underestimate the ecological parameters of the application. When I give 5 of my books to you and you give five of your own to another user, you actually recycle books, without having to destroy or throw them away. We recycle our libraries constantly.
[youtube]wXzC-xqZ4D0[/youtube]