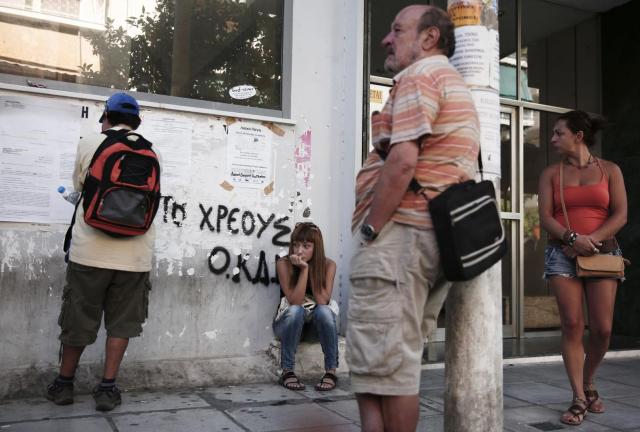 Greece’s record jobless rate was stuck for a second month in August at 27.3 percent – some 60.6 percent for those under 25 – leading the government to say that it’s a “sign of recovery” because it hasn’t gone up although the country remains mired in a deep recession for the sixth year with no signs of change.
The Greek Statistical agency ELSTAT said on Nov. 14 that 88,242 more people were out of work over the year till August, bringing the total number of unemployed to 1.36 million. That came as the government was in tough talks with international lenders over delayed reforms and a looming hole of 2.9 billion euros ($3.87 billion) in the 2014 budget that could require more austerity – and more people out of work.
ELSTAT figures showed that the rate for those 25-34 age was 37.4%. Unemployment continues to affect women harder than men, with a 31.4% unemployment rate compared to 24.3% for men.
The highest rates of unemployment were documented in Epirus – Western Macedonia (29.7%), Macedonia – Thrace (28.5%), Attica (27.5%), Crete (27.3%), Thessaly – Central Greece (26.9%), Peloponnesus , Western Greece and Ionian Isles (25.1%) and the Aegean (23.1%).
There were 3,631,430 employed, 1,365,406 unemployed and 3,360,334 non-active citizens (children, pensioners etc). ELSTAT noted that there were 88,242 fewer employed since August 2012, but 9,777 more compared to July 2013.
Similarly there were 95,326 more unemployed compared to August 2012 and 6,557 more compared to July 2013. Regarding non-active citizens, there were 620 fewer compared to August 2012 and 9,068 fewer compared to July 2013.
Greece’s economy shrank by a slightly better-than-expected 3 percent in the third quarter compared with the same period last year, its smallest such decline in nearly three years, thanks to a rebound in tourism.
The flash estimate of Gross Domestic Product (GDP) from ELSTAT on Nov. 14 marked the smallest fall in economic output since the third quarter of 2010. Economists had forecast a 3.1 percent contraction.
“The reading was broadly in line with expectations, reflecting mainly the positive impact of strong tourism revenues,” economist Platon Monokroussos at Athens-based Eurobank told Reuters. “The figure supports our forecast for a full-year reading less than -4.0 percent.”
The seasonally unadjusted data followed a downwardly revised 3.7 percent slump in the second quarter, bringing the economy’s annual contraction in the three quarters to 4.0 percent. Greece does not publish official quarter-on-quarter changes in GDP.
Tourism, which accounts for about a fifth of Greek GDP, is rebounding and revenues, which fell about 5 percent last year, jumped 13.7 percent in the first eight months of this year. Officials expect tourism revenues to rise by 10 percent in 2013 to 11 billion euros on a record 17 million visitors this year, a million more than last year.
The Troika projects the economy will shrink by 4 percent this year but Samaras said Greece is becoming a “success story” and will turn around next year. He said earlier this year that in January he would have a plan to put 75,000 of the country’s young to work but hasn’t said a word about it since.