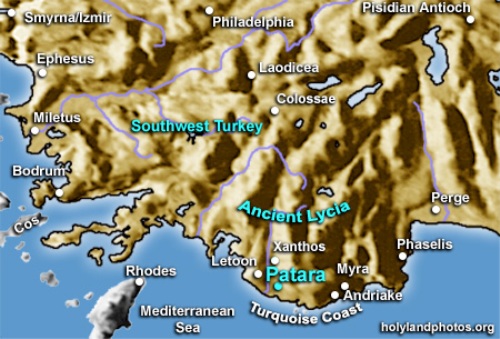 Scientists have recently discovered a new species of Scorpion in Turkey. Scientists describe the new species of scorpion, Euscorpius lycius, from the area of ancient Lycia, which today are regions of the Mugla and Antalya Provinces in Southwestern Turkey. Ancient Lycia is referred to in Egyptian and ancient Greek myths. Lycia was totally Hellenized under the Macedonians.

The Euscorpius is a genus of scorpions commonly called “wood-scorpions.” It is small in size, with the largest scorpion of this kind reaching approximately 5 cm in length. Its color is reddish dark brown. Euscorpius lycius is widely spread in North Africa and Eurasia. The venom of these scorpions is relatively harmless and has similar effects to that of a mosquito bite.

The new species is rather secretive, like the mystical history of the region. It prefers cold places, full of humidity, or hides in pine trees during the night. Euscorpius lycius also crawls on rocks or sits on stone garden walls.

“Further studies are in progress to understand the quantity and distribution of the different species and populations of the genus Euscorpius in Turkey, and their relationship with the Greek populations,” said lead author Dr. Ersen Aydın Yağmur.

“A total of 26 specimens belonging to the new species were collected from Antalya and Muğla Province, in the south-west of Turkey.” added Dr. Yağmur.

The study was published in the open access journal ZooKeys.