With Halloween just around the corner, people have chaotically flooded the streets in search of the perfect costume. Among the costumes featured in stores, many are inspired by ancient cultures and especially Ancient Greece. After conducting some field research by visiting various Halloween stores and attending Halloween pre-parties, here are the most popular and fun ones we came across….

1.  Aphrodite
Aphrodite is the goddess of beauty, love and lust and is known to stir up desire and passion in the hearts of people.  Her power and beauty was so great she is known for causing wars even among the gods. This costume seems to flood Halloween stores every year since everyone loves the role of the seductress. Her companion was baby cupid, who would strike unsuspecting victims with his arrows of love, leaving them confused and enchanted. If you’re a mommie, try this cute idea: dress up like Aphrodite and your baby like Cupid this year!

2. Traditional Greek Outfit – Tsolias
Greece is known for its elaborate traditional Greek outfits. These costumes are very unique and colorful featuring big frilly skirts, headpieces and curved shoes with fluffs on them. Many Greeks living abroad who are proud of their heritage often times wear them during Halloween. 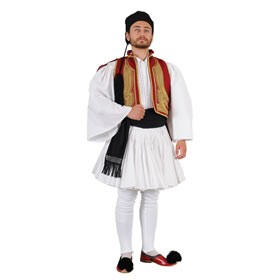 3. Greek Statue
With the economy being affected worldwide and hipster in fashion, many have taken the DIY route to costume-making this year. A “Do It Yourself” Greek Statue costume consisted of white sheets, white face paint and sandals is an instant classic for children and adults alike. Be careful however, if you have a beard not to get confused with Socrates. 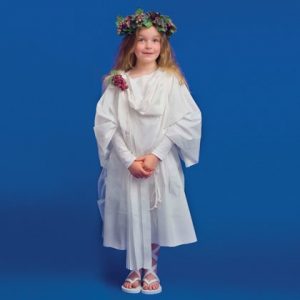 4. Hades
Hades is the God of the Dead and of the Underworld as well as Zeus’ brother. His wife Persephone was God Demeter’s daughter and is also a prominent figure in Ancient Greek mythology. So if you are a couple, this unlikely pair is a great option. However, going solo as Hades is not such a bad idea either since vampires and mythical beings of darkness have taken over pop culture in the last couple of years. 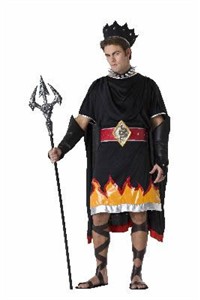 5. Warrior Princess
The ancient Greek dynamic amazons, which are classic icons of female power, are definitely a great choice this year combining tough with sexy. Empowered women never fail to amaze, and with your sword you can ward off those unwanted “suitors.” 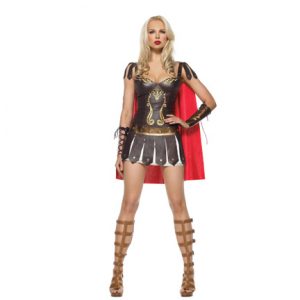 6. Megara
Megara who was Hercules’ first wife in ancient mythology, is also a big favorite especially among children, mostly due the popularity of Disney’s Megara-inspired character from the cartoon “Hercules.” However, there are many adults who also rock the outfit. Megara’s controversial seductive and manipulative character gives depth and edge. The fact that it’s Disney, conveys the playful and fun personality of those who wear it. 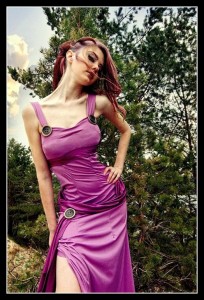 7. Pan
The pan was a half-man half-goat whose favorite pastime was chasing nymphs in the forest. Pans are Dionysus’ followers and are very animated and quirky. This costume is meant for those who dare, like the “school prankster” personality types.

8. Dionysus
Dionysus was the god of theatre, wine and carnival, which is the equivalent of “Halloween” in Europe, stemmed from his festivals in ancient Greece. Therefore, what would be more perfect than a costume associated with drinking, eating, and an excess of festivities for Halloween night? 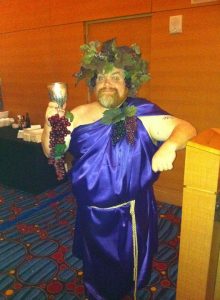 9. Lernaean Hydra
Another costume very popular among youngsters, is the 3-headed monster Hercules faced as one of his Twelve Labors. This costume is frequently seen among toddlers whose hip parents want to keep them warm while turning heads. 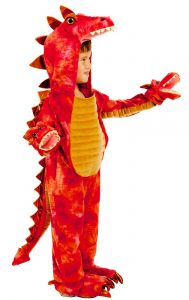 10. Trojan
Even though the Trojans were beat by the Greeks, USC is not the only place you will see people dressed like them. The costume seems to be a very popular one, often being confused with that of a gladiator’s or Hercules. 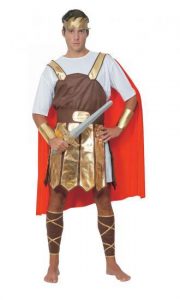 11. Calypso
Calypso was a woman so beautiful that she enchanted Odysseus and tricked him into staying on her island for seven long years. The costume is frequently seen in pastel blue colors although variations are available depending on the store. 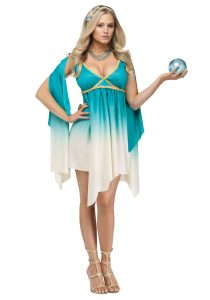 The Ancient Greek Weightlifter and the 316-Pound Rock

Why Greek Honey Is the Best in the World: A Beekeeper Explains