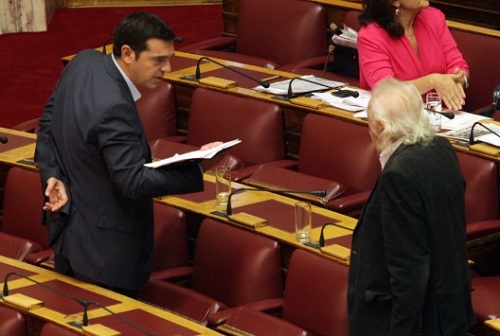 The Council of Presidents of the European Left finally came to the proposal of the nomination of the President of SYRIZA Mr. Alexis Tsipras for the position of President of the European Commission in the upcoming elections of 2014. The proposal will be officially presented at the 4th Congress of the European Left, on the 13th to 15th of December in Madrid, which is when the final decision will take place.
According to SYRIZA, “the candidacy of Alexis Tsipras was supported by all the participants.”
According SYRIZA “the choice of Alexis Tsipras symbolizes the real hope for social and political change in Europe. The course of SYRIZA in Greece is the first concrete example of the rising European Left into a leading power. The course of SYRIZA is also an example of unprecedented success of the Left, as an independent social and political power, managing to break the traditional two-party system.
The message that the European Left aspires to send through the candidacy of Alexis Tsipras, is that the strategy of austerity can be beaten and that the alternative proposal of the Left may open new ways to unite people, and workers of Europe, thus preventing the emergence of the nationalist, chauvinist right-wing approaches.”