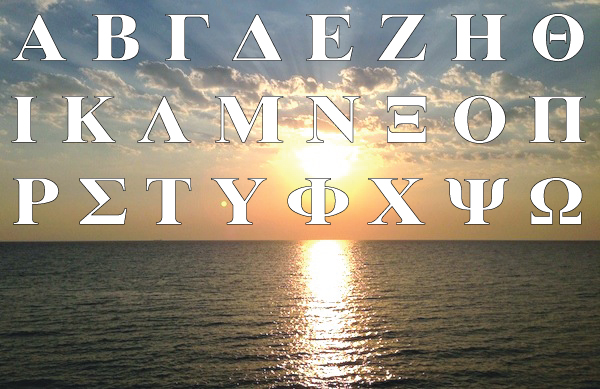 According to the Greek Alphabet Code, letters of the Ancient Greek Alphabet reach out to our present times modified or “deformed”, compared to their original form, but they still continue to “carry” meanings. Dr Theologos Simaioforos** decoded these meanings, revealing the Grandeur of our language and also the glory of those intellects that contrived and «constructed» the Greek Language. Our language, amongst other revelations, describes operations and functions of Nature and that’s what makes it Immortal…
By Foteini Tyraski*
When I first watched a TV program, referring to the Greek Language Code, it was a revelation for me. Everythingt I heard, was so familiar, not because it was about my language, but because all this knowledge I’ve collected through my field of study, all this knowledge that connects Art with Nature, sprang alive in front of my eyes. All of a sudden, the letters have been converted to «ideograms», that not only they had (according to the Code) a univocal meaning-interpretation, but also their graph emitted this significance and there could not be another shape for each, in order to confirm their sense.
At this point, I should give you some examples: When we want to define a space, even “by gesture”, we make a circle. If you exclude our modern times that people lack of contact with Nature, the ancient settlements, the primitive huts, our planet (as home), even the human sense for space, «from one’s mother’s womb», have the shape of a circle.
So, the letter that could better describe space is Ο(Omicron), which, according to the Greek Language Code, means a particular space or area of all sizes.
Another letter, relative to O as a graph, is Φ(Phi). Letter Φ describes a space (Ο), that is «bisected» by a vertical line. So, before we decode Φ, we’ll have a look on this line, which is a Ι(Iota). A vertical line as an optical symbolism in Art-Nature field, is a line of action and motion, considering also the fact, that the human eye “reads” in its optical field from top to bottom. . According to the Greek Language Code, Ι describes the descent of a small quantity of force, light or radiation that constantly supplies… …
So, if we complete our phrase in order to understand the letter Φ, we’ll say: (Ι) the descent of a small quantity of force, light or radiation that constantly supplies (Ο) a space. This is exactly the code meaning of light, as, according to Dr Simaioforos, Φ means the Light.
The letter Ρ(Rho) represents a space Ο, from which the radiation of an Ι (Iota) is “flowing”, so Ρ, rightly, means the flow (Ρ = flowing of energy, radiation, liquid).
When children draw the sun, they make a circle with rays (just like the shapes below):

The letter that exactly expresses the Solar radiation, is Λ(Lambda), and it is defined so, by the Greek Alphabet Code, as Λ = Solar radiation and liquids in Nature (when referring to forces on Earth). When we close the shape of Λ (Λ-Δ) we create a triangle, just like a dynamic energy field and the letter Δ (Delta) is created, which, according to the Code, expresses Δ = Power-Force that constructs and creates.
The letter Α (Alpha) means the Primary Force and schematically it is a complex letter, as Λ and Δ are embedded. This shows that we perceive this Primary Force through Solar radiation.
The letter Ε(Epsilon), by Code, expresses the sense of Motion-Movement-Course-Expansion and it’s easy to comprehend it, if we consider that when we call somebody from afar, we use it, (Hey… you! Hey Alex…). So, when phonetically using Ε… and sometimes, along with a tense of our hands towards someone, shows the effort of our existence to expand and communicate with the person that is away.
As for Μ (Mu), in shape, shows two Lambda (ΛΛ) united, which corresponds to the following information: Double amount of solar radiation leads to such condensation of matter, so that we can see things and creatures. Indeed, according the Greek Alphabet Code, Μ is the Visible Nature.
According to the philosophy of this Code, the consonants are divided in two groups, the celestials and the earthly (see related tables in www.ramafa.gr). This helps us separate, conceptually, the actions and properties of letters.
The letter Τ (Tau), according to the Code, means Τ = Consolidation, Firmament of force-radiation so, as an earthly consonant, its horizontal line refers to the ground level. All the force that governs this letter, acts under the surface of the earth, but because of the concentration of the earthen material, this force is consolidated.
Π (Pi), according to the Code is a celestial consonant, so its horizontal line refers to the sky-heaven level. The two vertical lines are the energy suppliers and surround all that is “under His protection”. The letter Π, means primarily Father God and secondarily Fire – the first element of Creation.
The letter Θ (Theta) describes a space (Ο) bisected by an horizontal line. This line expresses a level (for example: the horizon).
If we look to the horizon through a telescope we see a Θ, where Θ, according to the Code, means Viewing.
Ζ (Zeta), by shape, describes the power of thunderbolt that is charging earth and according to Dr Simaioforos’ Code, Ζ is Life and Heat-Warmth.
Τhe letter Υ (Upsilon), with its shape like funnel, expresses Υ = Concentration, Accumulation of radiation-energy, by its Code meaning.
The letter Η (Eta) is two Ι iota united (Ι+Ι), so in this case we exclude the information following: Since Ι describes the descent of a small quantity of force, light or radiation that constantly supplies… when this small quantity becomes greater, it becomes also visible.
According to the Greek Alphabet Code, Η means Appearance-Revelation.
Taking under consideration that language is a living organism, we could imagine that it has “flesh and bones”. This part of “bones”, which is the main structure of a word and the basis of its meaning, is played by the consonants. So the part of the “flesh”, which is the voice and the light of the word, is played by the vowels. The Greek Language has more vowels than any other language, so, when talking in Greek, we emit more light, using all range of 7 colors. We hear 7 musical notes, we see 7 colours, we have 7 energy centers and the vowels of the Greek Alphabet are 7.
Counting the human spine, we realize that the cervical vertebrae corresponding to the vocal chords are 7 (as many as the vowels of the Greek Alphabet), while the thoracic and lumbar vertebrae are 17 (just as many as the consonants…). The human body has the same ratio of water to Earth, while the number of days of the year is 10 times more than humans’ temperature (measured in Celsius scale).
The human body is structured according to Nature and the physical Laws of our planet. So when we consciously use a language that reflects and obeys these Laws, we live in better terms with each other and our environment, we become cleverer, and we walk the highway of Philosophy, mother of all sciences, no matter what’s the educational level of each, which is a road to improvement of a person, from human to “Anthropos”.
In my opinion, Greek Language is the Solar Language that enlightens people’s minds. You don’t need to be a Greek citizen or to have been born in a country called Greece, to be EΛΛHN. Every seeker of the Truth on this planet, using his logic, has the potential to become ΕΛΛΗΝ.
By the word itself, we can learn what ΕΛΛΗΝ means, which is “the Enlighted Mind-Intellect”.
After decoding the letters, using the Greek Language Code, the meaning of the word is revealed:
Ε = Motion-Movement-Course-Expansion of
ΛΛ = a double (great) quantity of Solar radiation (enlightment)
Η = that is revealed
Ν = into the Mind and by Law.
We are the blessed generation of people, that are able to use the Wisdom of our ancestors, not only the inheritance of 2.500 years old, but also all very ancient –way back in time- scriptures, myths, names and words, that secretly keep cosmogonic philosophic, theological and scientific Knowledge-information, travelling in time, left hidden for us to discover…

**Analysis on Basic Design elements (Data Key Plan of Art and Design) was made using the Greek Alphabet Code (a philosophical study of language by Dr Theologos Simaioforos).