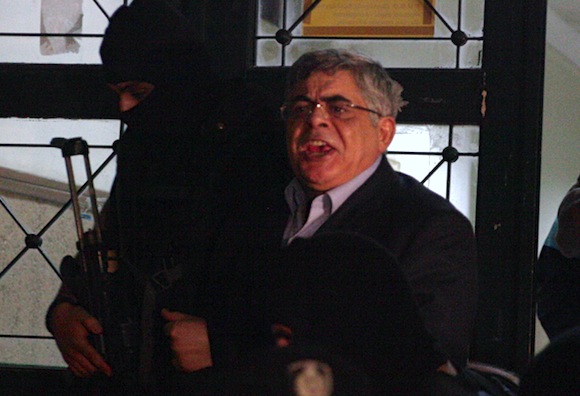 Nikos Michaloliakos, the leader of the far-right Golden Dawn party was jailed on charges of belonging to a criminal group, officials said on Thursday. Michaloliakos will be awaiting trial in jail contrary to Golden Dawn MP’s Ilias Kasidiaris and Ilias Panayotaors who were released on conditions. They face the same charges.
Michaloliakos is believed to be a neo-Nazi and has praised Hitler publicly in the past but he denies the accusations.
The decision was made after the Golden Dawn leader responded to charges of leading and participating in a “criminal organization,” Reuters quoted a court official as saying. Nikos Michaloliakos denied all the charges.
Greek police arrested the leader, several MPs, and dozens of members of the far-right Golden Dawn party on Saturday.
They have been charged on what prosecutors say is evidence linking the party with a series of attacks, including the stabbing of rapper Pavlos Fissas on Sept. 17 and the killing of an immigrant earlier this year. A trial date has not been set.
Prime Minister Antonis Samaras’ government has vowed to wipe out a party of “Nazi descendents” but said he would not try to have it outlawed as Golden Dawn has 18 seats in Parliament and the Constitution prohibits banning political parties. The MP’s are also still being paid while facing charges.
Watch the Golden Dawn leader as he exits the magistrates office:

If convicted, the Goldean Dawn leader who still holds his seat at the Greek parliament faces at least 10 years in prison.
Golden Dawn had capitalized on Greeks’ anger to crushing austerity measures imposed by the government on the orders of international lenders and by blaming immigrants for rising crime. The party denied it was connected to scores of assaults of beatings of immigrants and violence toward leftists, Communists and gays.
After the killing of hip-hop artist Pavlos Fyssas on Sept. 17, for which one of its members was arrested, anti-Golden Dawn protests grew and the party’s popularity, which had grown from 6.97 percent of the vote when it was elected into office in June 2012 to nearly double that, fell 2.5 percent overnight.