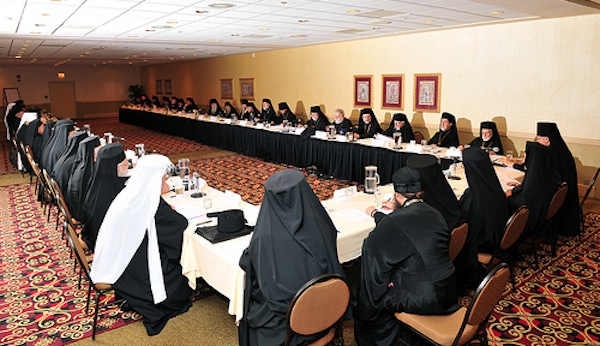 In the final day of its annual meeting, the Assembly of Canonical Orthodox Bishops of North and Central America issued the following statement on the Orthodox Church’s unchanging position on marriage and sexuality.

To our Orthodox Faithful

1. We, the Assembly of Canonical Orthodox Bishops of North and Central America, representing millions of Orthodox Christians in the United States of America, Canada and Central America, express our deep concern over recent actions on the part of our respective governments and certain societal trends concerning the status of marriage in our countries, in particular the legalization of same-sex unions.

2. The Orthodox Christian teaching on marriage and sexuality, firmly grounded in Holy Scripture, two millennia of Church Tradition, and Canon Law, holds that the sacrament of marriage consists in the union of a man and a woman, and that authentic marriage reflects the sacred unity that exists between Christ and His Bride, the Church.

3. Persons with homosexual orientation are to be cared for with the same mercy and love that is bestowed on all of humanity by our Lord Jesus Christ. Moreover, the Church is a spiritual hospital, where we all are called to find the healing of our fallen humanity through Jesus Christ, who assumed human nature in order to restore it. All of us struggle with various passions, and it is only within the Church that we find the means of overcoming these passions with the assistance of God’s grace. Acting upon any sexual attraction outside of sacramental marriage, whether the attraction is heterosexual or homosexual, alienates us from God.

4. We exhort the clergy and faithful of the Orthodox Church to bear witness to the timeless teachings of Christ by striving for purity and holiness in their own lives, by instructing their families and communities in the precepts of the Holy Gospel, and by placing their trust in our Lord, who “has overcome the world.” (John 16.33)

5. Finally, we encourage our faithful to approach their parish priest or spiritual father with any questions or concerns about this statement and its practical repercussions in their daily lives.

The Assembly also released a statement on violence in the Middle East; and a message to the faithful.

In other business, the Assembly voted unanimously to re-elect Bishop Basil as secretary and Metropolitan Antony as treasurer. Archbishop Demetrios recognized and commended them for their devotion to the Assembly over the past three years. The Assembly also reviewed and approved the 2014 budget.

The Assembly expects to hold its next meeting in September 2014.