A Night of Chaos in Greece 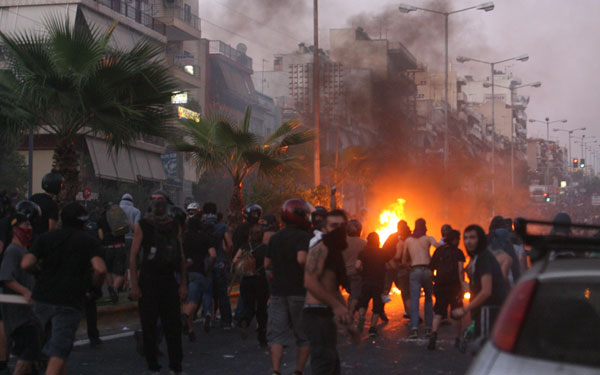 Athens and other cities around Greece erupted in violence the night of Sept. 18 in protests over the murder earlier in the day of a 34-year-old anti-fascist hip-hop artist who police said was stabbed to death by a member of the neo-Nazi Golden Dawn party, Giorgos Roupakios, who was arrested. He appeared before a prosecutor while the demonstrations were raging and will appear before a magistrate on Sept. 21.
While the government scrambled to find ways to legally control Golden Dawn, which has 18 seats in Parliament, the friends and family of Pavlos Fyssas buried him the morning of Sept. 20, little more than a day after he was killed at a cafe in the southern Athens neighborhood of Amfiali, where he had gone with friends and his fiance to watch the Olympiakos-Paris St. Germain soccer game on TV.
Reports differed but it was said that words broke out between Fyssas and his friends and Golden Dawn members and that the extremists left and called for reinforcements and that as many as 40 of their gang attacked Fyssas and several of his friends. Witnesses said Roupakios, unable to physically knock down Fyssas, stabbed him three times before fleeing.
That set off immediate protests and a chain reaction in Athens, Thessaloniki, Patra and other places around the country in a fury of anti-Golden Dawn anger while the extremists lawmakers stayed in hiding and didn’t go to the Parliament where political parties across the spectrum, usually rivals and enemies, banded together in a unified front against them.
Police said more than 75 people were detained in protests. After the anger and a police raid on its party headquarters, Golden Dawn members stayed off the streets as their pattern of attacks is to have huge odds in their favor when confronting others instead of one-on-one. They have also been accused of attacking immigrants, and in another incident this month, of a huge gang of Golden Dawners attacking a handful of Communists putting up flyers.
Golden Dawn leader Nicholas Michaloliakos denied that the party had anything to do with the attack although police said Roupakios worked for the party in a canteen, his wife worked for them as a cleaner and their daughter was a member. She was being prosecuted as well for making false statements and hiding evidence and weapons.
In Keratsini, violence broke out near the scene of the stabbing, with hundreds of protesters attacking a nearby police station. The confrontation lasted more than two hours, with riot police using tear gas to repel youths, who set fire to trash bins and smashed up sidewalks with hammers to throw rocks at police.
The clashes left a busy suburban road strewn with rocks and smoldering trash for several hundred . Traffic outside the busy port of Piraeus was disrupted as police cordoned off streets to stop protesters from reaching the area.
In Thessaloniki, Greece’s second-largest city, 6,000 demonstrators marched. Greek media also reported violent clashes in the western city of Patras, the northeastern city of Xanthi, the central city of Larissa and in Chania on the southern island of Crete. Authorities said 41 people were detained in Keratsini, and 36 in Thessaloniki.
Earlier, friends of the victim and residents left flowers and candles at the spot of the attack, where blood still stained the sidewalk. The head of a small right-wing opposition party, Panos Kamenos of the Independent Greeks, was assaulted when he attempted to visit the site.
Deputy Prime Minister Evangelos Venizelos, whose PASOK Socialist party is part of the coalition government, said Golden Dawn had “violence as its priority and must be dealt with as a criminal organization.” Prime Minister Antonis Samaras, leader of the right-wing New Democracy Conservatives, said nothing about the incident
“Politically motivated violence of this kind is unacceptable anywhere, and history has shown the grim consequences if it goes unchecked,” said Jezerca Tigani, Amnesty International’s Deputy Europe and Central Asia program director. “The Greek authorities must send a clear message that attacks like this will not be tolerated.”
Party members and supporters, often clearly identifiable in black T-shirts and combat pants, have been suspected of beatings and stabbings across the country, usually of dark-skinned migrants. In January, two men identified as party sympathizers were arrested for the fatal stabbing of a Pakistani migrant worker.
The killing was the first attributed to a Golden Dawn member, and the most severe attributed to political rather than racial motives.
“I am shaken by the event,” said Public Order Minister Nikos Dendias, who cancelled a visit to Rome . The killing and other recent violent incidents “show in the clearest possible way the intentions of the neo-Nazi creation,” he said.
Michaloliakos said his party “unreservedly condemns the murder of the 34-year-old at Keratsini and denies any involvement of the party.” He added that, “All the political parties must assume their responsibilities and not create a climate of civil war, giving a political character to a tragic event.” Other party members dismissed the killing as a drunken bar brawl.