Mycenean Palace and Linear B Tablets Discovered in Sparta Area 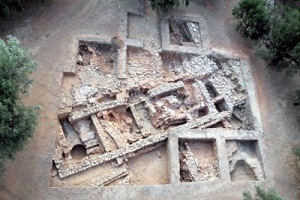 A new excavation in the Xirokambi area of Aghios Vassilios west of Sparta, in the Peloponnese, Greece, has revealed a richness of Mycenean artefacts in the area, including the remains of a palace, Linear B tablets, fragments of wall paintings, and several bronze swords.
The excavation, led by emeritus ephor of antiquities Adamantia Vassilogrambrou, was presented publicly at the biennial Shanghai Archaeology Forum at the end of August as one of 11 sites showcased from different parts of the world.
The Aghios Vassilios excavation began in 2010, after Linear B tablets were found in the area in 2008, pointing to the existence of a powerful central authority and distribution system. The deciphered texts were devoted to perfume and cloth production, the trade of which was controlled by a palace administration in the Mycenean era.
Evidence of a central palace administration was confirmed also by the architecture, which is dated to the 14th century BC, while contact with Crete was confirmed by the finding of a double axe, a feature of the island’s palace culture.
Artefacts found include seals, a multitude of ceramic and bronze vessels, and 21 bronze swords. According to the evidence, a sudden fire that broke out either at the end of the 14th century or the beginning of the 13th destroyed the three buildings on the site which were never rebuilt at the same location.
(source: ana-mpa)