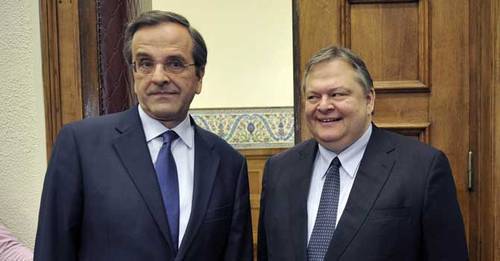 Greek Prime Minister and New Democracy Conservative leader Antonis Samaras and his Deputy PM/Foreign Minister,  PASOK Socialist leader Evangelos Venizelos, said after a meeting that they would prefer a diplomatic solution to Syria’s ongoing civil war instead of a military strike by western powers.
But, they said they would also allow NATO to use its bases in Greece in case the decision is made to strike Syria via the air.
The meeting was defense-oriented with Finance Minsiter Yannis Stournaras also talking about the privatization plans for the state-owned defense industries (LARKO, ELVO and EAS).
In preparation for the possibility of refugee waves from Syria, an emergency meeting was scheduled at the Ministry of National Defense on the morning of Aug. 30 with the participation of the General Secretaries from the Ministries of Foreign Affairs, the Interior, Public Order, Health and Shipping.
The leaders of the National Defense General Staff, Army, Navy, Air Force, Hellenic Police, Coast Guard, Fire Brigade and Central Intelligence Services are also invited to participate in the discussion.