One in 10 Workers Faked Resume 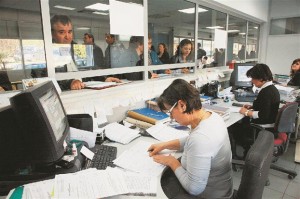 As it’s begun the process of transferring or firing 25,000 state workers over the next two years on the orders of international lenders, the Greek government said it has found so far that 10 percent of those it hired falsified their credentials and are first in line to be let go now.
Alternate Interior Minister Leonidas Grigorakos has called for the qualifications of all civil servants hired in the past 20 years to be rechecked for authenticity after declaring that 10 percent of staff hired from 2004 to 2009 during the administration of then-New Democracy leader Costas Karamanlis got their jobs by taking their qualifications and education certificates.
Speaking to Kathimerini after revealing the preliminary findings of a process to check the authenticity of qualifications, Grigorakos called for the appointment of an independent authority headed by a judicial official tasked with checking the legitimacy of all civil servants’ education qualifications.
“We are here making horizontal cuts and this is not fair,” Grigorakos said. A total of 15,000 civil servants are set to lose their jobs by the end of 2014 and another 25,000 put in a mobility scheme by the end of this year as part of government efforts to streamline the public sector in line with demands from the Troika of the European Union-International Monetary Fund-European Central Bank (EU-IMF-ECB).
Administrative Reform Minister Kyriakos Mitsotakis had promised that there would be a full, in-depth review of the qualifications of all workers before anyone was put into a so-called mobility scheme in which they would be paid 75 percent of their already-reduced pay for up to eight months and then fired if another job couldn’t be found for then.
The scheme has already been put into place, however, and the government is firing or transferring mostly low-paid workers such as school crossing guards, janitors, teachers, and municipal police officers while exempting high-paid managers as well as Parliament workers, who’ve also been excused from any further austerity measures being imposed on everyone else.
According to the data presented by Grigorakos on Mega TV, 850,000 new hirings were made in the civil service in the 2004-09 period. “Of these, more than 10 percent were on the basis of false qualification certificates, which had not been approved by the Supreme Council for Personnel Selection (ASEP),” Grigorakos said, referring to the body responsible for appointing civil servants.
That means at least 85,000 people forged or falsified their educational and/or work experience to get a state job, more than three times the number needed to be let go to satisfy the Troika and without the need to fire anyone else if the government roots out problems workers, which also include those who don’t show up to work for long durations or at all, are disciplinary problems or have committed felonies.
In one of the most high-profile cases of faking qualifications, a high-ranking executive at the Hellenic Aerospace Industry (EAB) is to face criminal charges after it was found that he used a forged degree from Columbia University to land his 7,500-euro ($9,954) a month job.
Prosecutor Yiannis Dragatsis filed charges against the executive, who held the position of General Manager in charge of operations at EAB, and the members of the board who hired him in 2008 and renewed his contract in 2012. The suspect is alleged to have received more than 500,000 euros ($650,000) in pay during his time at the company.
Deputy Administrative Reform Minister Evi Christofilopoulou revealed that three municipal policemen had been fired after being discovered to be holding fake degrees. Checks are continuing, she said.
Greece’s economic crisis has been caused largely by alternating administrations of New Democracy and its political rival, the PASOK Socialists, hiring hundreds of thousands of needless workers over the years in return for votes. They are now in a coalition government charged with firing many of the people they hired.