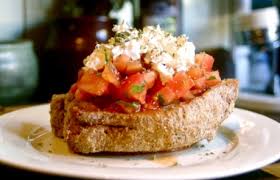 The cultural association To Rhodo in Chania, Crete, is making a giant dakos. For those who may not know, dakos is a Cretan meze, consisting of a slice of soaked dried bread or barley rusk (paximadi) topped with chopped tomatoes and crumbled feta or mizithra cheese, olives and flavored with herbs such as dried oregano.
The makers of this enormous dakos aspire to see it written in the book of Guinness World Records. Its presentation will take place in the afternoon of Sunday August 25 at Agii Apostoli Park, in Chania, as part of the two-day cultural events organized by the Municipality of Chania in cooperation with the association To Rhodo.
Indeed, the dakos that will be presented during the event will be the biggest rusk in the world and will have the shape of the island of Crete. In particular, its dimensions will be 1.80 x 8 meters.
During its preparation, that will last four days in total, the dakos will be separated in four big pieces representing the island’s four regional units and each piece will have dimensions of 1.80 x 2 meters. Then it will be baked and put back together.
For the preparation of this giant dakos, whole wheat flour, barley, yeast, olive oil and salt are used, while the dough alone will weigh 160 kilos.
As the president of the cultural association To Rhodo, Nikos Mathioudakis stated to ANA-MPA, in parallel with the preparation of the giant dakos, on August 24 a roasting competition will take place with traditional Cretan recipes, while the events will be accompanied by traditional music groups from all around the Chania region.
“This will be a two-day fest dedicated to the Cretan diet. Our effort and main goal is to make young people familiar with it, to promote the traditional products of the island, such as the dakos and its beneficial properties for the health,” Mathioudakis said.
Dakos is a well loved traditional dish of Crete, as it can be made easily and fast, while it constitutes a complete and nutritious meal, especially preferred by the clients of restaurants and taverns.