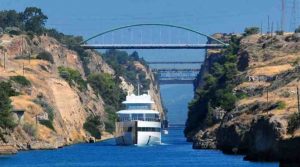 The yacht of late Apple founder Steve Jobs showed up in Hydra last weekend with locals wondering if his family would stay long in Greece and visit the Ionian Sea islands.
Venus carried members of the Jobs family and other guests and passed through the Corinth Canal from the Saronic Gulf to the Corinthian Gulf with destinations in the Ionian.
The luxury boat, of 80 meters, has a large terrace with jacuzzi, a private speedboat, while its exterior is made of aluminum, which makes it lighter and faster than some vessels of its class. Also, all its appliances are controlled through screens of 27-inches iMacs which are in the control room.
Jobs was designing the vessel for many years, but he never managed to travel on it, as the work was completed one year after his death.