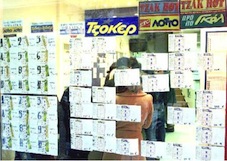 The concession agreement for the exclusive right to operate the Hellenic Republic’s State Lotteries for a period of 12 years was signed on July 30 between the Hellenic Republic Asset Development Fund (HRADF) and the Hellenic Lotteries SA.
Hellenic Lotteries SA is a consortium of OPAP Investment Limited (67%), Intralot Lotteries Limited (16.5%) and Scientific Games Global Gaming S.Γ .r.l (16.5%).
The concession agreement, which has already been approved by the Court of Auditors, will be submitted to the Greek Parliament for ratification, while it is subject to approval by the Competition Authorities of Greece and Cyprus.
The total value of the financial consideration for the Hellenic Republic includes the upfront fee of 190 million euros in cash, and a guaranteed minimum income of 580 million euros (over a 12-year period), namely a total amount of at least 770 million euros.
(Source: ana-mpa)