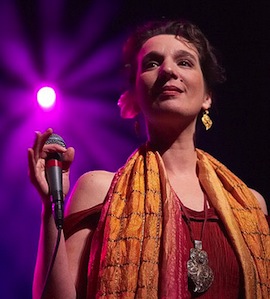 The internationally known Portuguese songwriter and singer Dulce Pontes will give three concerts in Greece, in Patras, Thessaloniki and in Athens.
All three concerts will be a attributed to the Italian composer Ennio Morricone who the Greeks’ favorite Portuguese singer admires and loves.  She will sing well-known songs of his, including many from film soundtracks.
Dulce Pontes became widely known to the Greek public after her duets with George Dalaras and Eleftheria Arvanitaki, in whose albums she participated and sung with them songs that became famous in Greek, such as Fotia kai Hioni with Arvanitaki and O mare e tu with Dalaras. Greeks loved her for her voice and wonderful interpretations.
Dulce Pontes, except from compositions of the great Italian composer honoring their exceptional cooperation, will also sing fados (Portuguese folk songs) as well as some well-known songs of her own discography.
Dulce Pontes will give a concert at the Roman Odeon of Patras on July 13, then at the Studio Theatre of Lazaristes Monastery July 15 and, finally, in Athens at Lykavittos Theatre on July 16.