Diamantopoulou Breaks From PASOK Too 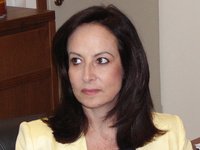 With his party sinking to the 5 percent level in the polls and 116 million euros ($150 million) in debt, PASOK Socialist leader Evangelos Venizelos now has lost another former minister who has broken away to form a rival party.
Former Education Minister Anna Diamantopoulou – who had gone along with Venizelos’ support of crushing austerity measures –  said she wants to woo other disaffected Greeks and will create a party that hasn’t been named yet.
Speaking to state-run NET TV in an interview, Diamantopoulou said that PASOK’s days are over and the party that, along with the New Democracy Conservatives had taken turns pushing Greece into economic ruin for decades, is done.  “PASOK has no reason to exist anymore,” she said. “Today, I am like millions of others who could express themselves through PASOK over the past 40 years but can no longer do so.”
Diamantopoulou, 54, first became an MP with the Socialists in 1996 and from 1999 to 2004 held the position of European Commissioner for Employment and Social Affairs. She suggested Greece needs a new party that can speak for disgruntled PASOK supporters but lamented the lack of a leader to unite people. “It is my ambition to be able to contribute to this,” said Diamantopoulou, who recently helped create the pro-reform DIKTYO think-tank.
If Diamantopoulou starts her own party, she will be following in the footsteps of former cabinet colleagues Louka Katseli, who formed Koinoniki Symfonia (Social Pact) ahead of last summer’s elections, and Andreas Loverdos who launched RIKSSY last month. Former government spokesman Ilias Mosialos is involved with the Dynamiki Ellada movement.
PASOK won 44 percent of the vote in gaining victory in the 2009 elections but then Prime Minister George Papandreou began imposing pay cuts, tax hikes and slashed pensions on the orders of international lenders and the party’s support fell off a cliff. Venizelos has continued his support for austerity as a member of Prime Minister and New Democracy leader Antonis Samaras’ government.
So has the tiny Democratic Left (DIMAR) which is in danger of falling below the 3 percent threshhold needed to gain seats in Parliament. If PASOK and DIMAR hadn’t thrown their votes behind Samaras, he wouldn’t have been able to form a government and the Leftists would be marginalized back-benchers in the Parliament.