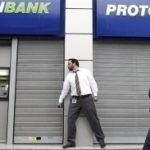 Two of Greece’s shakiest banks, Hellenic Postbank and Proton, will have to be sold by mid-July as the  country’s largest banks continue gobbling up smaller institutions as part of plans to help the beleaguered economy begin to recover, envoys from international lenders have directed. Proton was taken over when it became insolvency in the wake of bad loans and a scandal involving its chief shareholder, Lavrentis Lavrentiadis, who is in detention pending his trial.
After pushing its banks into deep trouble by imposing 74 percent losses on investors and bondholders last year, Greece is recapitalizing its four largest banks and winding down others with bad assets to try to kick start an economy deep in debt an as banks have suffered huge losses from non-performing loans as many Greeks, buried under pay cuts, tax hikes and slashed pensions, can’t afford to pay their loans, credit cards or mortgages.
Postbank and Proton were split into “good” and “bad” divisions and are now fully owned by the Hellenic Financial Stability Fund (HFSF) which received 50 billion euros ($64.25 billion) from Greece’s second bailout from the Troika of the European Union-International Monetary Fund-European Central Bank (EU-IMF-ECB) which ordered hard austerity measures in return.
The original Proton Bank had its license revoked and was liquidated after it was found to have more than €700 million ($900 million) in bad loans. New Proton Bank was then created as a so-called good bank, into which all Proton’s deposits and sound assets were transferred.
The recapitalization of the National Bank, Alpha, Piraeus and Eurobank  is expected to be completed by June 14. The four lenders need €27.5 billion euros ($33.53) and must raise at least 10% from private investors via share offerings to retain management control. The bulk of the funds will be pumped in by the HFSF rescue fund.