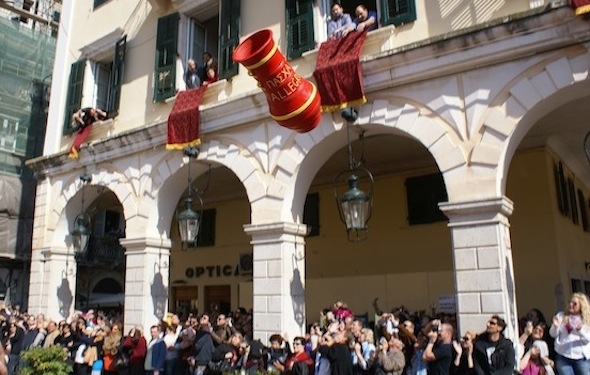 No doubt the cosmopolitan island of Corfu is the most popular Easter destination in Greece. Once again this year, Corfu had the chance to prove that its traditions are still alive and strong. The numerous visitors that went to the island to spend their Easter vacation certainly enjoyed the revival of the local customs in the unique Easter atmosphere only Corfu can provide.

In the Easter of 2013 that is now coming to an end, and especially during the Holy Week, Corfu revealed the excellence of its natural and cultural beauty. The concerts of classical and church music in temples around the city gave Corfu a special and enchanting color. On Palm Sunday (the Sunday before Easter), at 11 in the morning, the litany of St. Spyridon’s venerable relics took place. The custom, which commemorates the end of the plague epidemic that had decimated Corfiots, went on until 16:30 in the afternoon. All the fifteen philharmonic bands of the island participated in the litany and at midday, fried cod-fish with garlic sauce was served.
Following the tradition faithfully, on Good Monday the housewives of Corfu kneaded and baked the traditional foyátsa” (a kind of brioche decorated with a red egg). They also made “mandoláto” (a nobles’ favorite macaroon made of almond and honey). Holy Friday is the most sacred day of the Holy Week, the day of the culmination of the passion of Christ with the deposition from the cross and Christ’s burial. On Holy Friday, the procession of Epitaphs started early following a strict schedule and old protocols. The processions of the Epitaphs started simultaneously around the city and were highlighted by their meetings in different spots of the city. On Friday evening, the procession of the last Epitaph started, which is traditionally the most impressive one, the Epitaph of the Metropolitan church of Corfu, Panagia Spiliotissa and Saint Theodora Cathedral. Sailors bore, like every year, the Epitaph on their shoulders which was followed by all the priests of the city and three bands.
On the morning of Holy Saturday at six o’clock, at the church of the Virgin Mary of Ksénon (of the strangers) visitors had the chance to live a unique experience. As every year, the custom of the artificial earthquake which re-enacts the earthquake that followed Christ’s Resurrection took place. Thunderous knocks create an atmosphere of piety and triumph, it is the victory of life over death. Shortly after 11 in the morning right after the litany of the relics of St. Spyridon, the most popular Easter custom of Corfu began. Corfiots hurled from windows and balconies dozens of clay pots filled with water which crashed noisily on the streets below. The gripping atmosphere was heightened by the thunderous cannon fires from the city’s Old Fort, as well as by the music played by the philharmonic bands and the applause of hundreds of tourists and locals who attended the celebration.
Finally, to celebrate Easter Sunday of 2013, locals and visitors attended the Service of Love, and then ventured out of Corfu town and into the countryside and villages to participate in all the festivities held throughout the island.