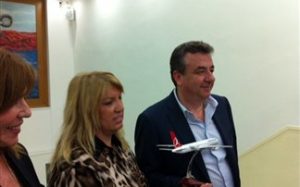 Turkish Airlines, expanding its presence as Europe’s number one airline, is talking with officials on Crete about a direct flight from Heraklion to Istanbul.
A delegation of Turkish Airlines visited the Regional Governor of Crete Stavros Arnaoutakis on March 28.
The subject of the meeting was the connection of Crete and Istanbul with a direct flight. Turkish Airlines appears ready to go ahead with the route and said it’s awaiting formal approval for licenses.
As mentioned by the company’s spokesman, Turkish Airlines expects three to four flights per week from Crete to Istanbul throughout the year and sees the island as a strong market, especially with a pool of more than a million Turkish tourists who are keen on Greek islands.
“We are interested in Crete. We know Crete and its beauties and we want to make it known to the others,” airline officials stressed, giving emphasis as well to Greeks of Diaspora as the flight would link with connecting flights to China, Japan, Korea and India.
In the context of the forthcoming launce of routes, in next June, leading Turkish tourist agents will visit Crete, in order to get to know the culture, the monuments and the natural beauty of the island.