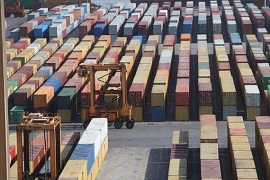 Partially offsetting dire news for the rest of the economy, Greek exports took off in 2012,giving the country the distinction of the biggest growth in the area, climbing two places in the 27 countries of the European Union as its commodities continue to be prized.
According Eurostat, the European Statistical Service, Greek exports rose by 17% from 2011 to 2012.  Dimitris Lakasas, President of SEVE, the  trade association of Northern Greek exporters, welcomed the results and stated that Greece should look at the example of countries such as Estonia and Slovakia who are big exporters in an economy while relies on that sector. At the same imports rose by 7% making the trade deficit  fall 4.5 percent.
Greek exports are rising faster than the European average but are still lacking in volume. Exports are almost 35% of European GDP on average but only 13.8% in Greece, following a rise of 2.5% from 2011. European imports in average fell dramatically from 2011 to 2012, from 17.8% of GDP. The EU is the single largest recipient of Greek products and services, receiving almost half of Greek exports.