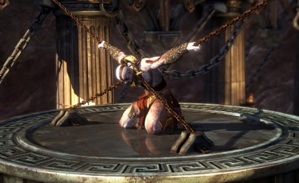 Kratos returns speaking his native language –  Greek! The fans of the successful video game , the God of War: Ascension, now can hear it for themselves.
After three years, the robust Spartan warrior returns to the new sequel of the epic game that predates the previous titles, and the players follow step-by-step the emotional path that led Kratos to become a violent and bloodthirsty assassin taking revenge from the Twelve Olympian Gods.
Loosely based on Greek mythology, the game is set in Ancient Greece with vengeance as its central motif. The player controls the protagonist Kratos, the former servant of the God of War, Ares. Kratos attempts to sever ties with Ares – who tricked Kratos into killing his wife and child – by defeating the three Furies.
Ascension’s story is dated six months after the loss of his woman and daughter, which means 10 years before the first God of War. Kratos blames for his loss, the god of war, Ares, and therefore he breaks his blood oath to the gods seeking a  way to take revenge.
The Sony Computer Entertainment Europe had also one more surprise for Greek fans – the voice artist Constantine Serafimides gave his voice to Kratos and the choice in Greek is in both dialogues and settings.
[youtube]gssBTS2k_NI[/youtube]