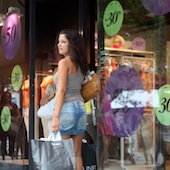 With austerity-crunched Greeks keeping their wallets in their pockets, retail stores are taking a big hit, with sales dropping like a stone in 2012, for a fourth consecutive year. The businesses reported an overall 10 percent slide and expect it to get worse this year.
Adjusted for inflation, sales dropped 12 percent, Greek statistics agency ELSTAT said, but overall consumers are buying 33 percent less than they were in 2009, a year after the country’s recession began with pay cuts, tax hikes and slashed pensions imposed by the government on the order of international lenders.
The rapid drop in consumption has been a major factor in the country’s deep recession, now in its sixth year, that has seen the Gross Domestic Product (GDP) fall by 24 percent since austerity began. During that time, more than 68,000 businesses have closed.
Household spending accounts for about three quarters of the economy in Greece the biggest share in any of the 17 Eurozone countries that use the euro, but with unemployment at a record 27 percent, pay cuts and tax hikes combined are eating up nearly half of disposable income, which has fallen 33 percent since 2010.
Ironically, while austerity was supposed to help the economy, it has hurt it, with tax revenues far off expectations despite big tax hikes because Greeks have slowed spending so much. Consumption taxes fell 23 percent in January and are expected to show a 6.3 percent drop for the year, making it harder for the government to meet fiscal targets, which could trigger more austerity, which could further drive down tax revenues in what some analysts have called a “death spiral.”
Even with sales up to 80 percent, many Greeks are just walking by and not even window shopping anymore. “The data is painting a rather grim picture about the state of the domestic consumer,” EFG Eurobank economist Platon Monokroussos told Reuters. Economists expect falling consumption to remain a drag on the economy this year, despite a slight improvement in consumer confidence after Athens secured more bailout funds in December, at the price of more austerity.
But falling prices may ease some of the pain. Greece and its foreign lenders expect consumer prices to fall by 0.8 percent in 2013, the first year of deflation in decades as some retailers, notably supermarkets, kept prices for a long time before finally relenting. The country’s dairy companies, which critics said operate like a cartel, have not cut back on prices in most cases. Producer prices stopped rising in January for the first time in more than three years, ELSTAT said.