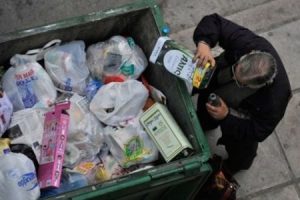 Unrelenting pay cuts, tax hikes and slashed pensions have put 31 percent of the Greek population at risk of poverty or social exclusion in 2011, according to a report released by Eurostat on Feb. 26. According to the report’s figures, the percentage of Greeks at risk of poverty was above that of the European Union average which stood at 24.2 percent.
The report also pointed to 30.4 percent of children under the age of 18 being at risk of poverty or social exclusion, compared to the EU’s average of 27 percent. In the 18 to 64 years old age group the percentage reached 31.7 percent, compared to 24.3 in the EU, while in the senior citizen category the figure stood at 29.3 percent, compared to the EU average of 20.5 percent.
Education was a pivotal factor when determining the risk of poverty the report showed: Children whose parents had a low level of education faced a 50.2 percent risk of poverty, compared to the 49.2 percent average in the European Union.
Children whose parents had a medium level of education had a 28.7 percent poverty risk, compared to the EU average of 22.4 percent, while children whose parents had acquired a high level of education faced a 7.9 percentage of risk of poverty, compared to the EU’s 7.5 percent.
Austerity measures have worsened the country’s recession, now in its sixth year, and created a record 27 percent unemployment, some 67.1 percent for those under 25, and put nearly 1.35 million people out of work. That coincides with rising rates of homelessness and suicide. The government has almost no programs to help the poor, leaving it to NGO’s and the Greek Orthodox Church to set up soup kitchens and medical clinics to help them.
The uneasy coalition government led by Prime Minister Antonis Samaras, the New Democracy Conservative party leader, has yet to act on promises to pass legislation allowing Greeks who can’t pay their bills and loans because of pay cuts of 30-40 percent to restructure them while his party and the rival PASOK Socialists owe banks some 250 million euros ($326.2 million) and haven’t paid.