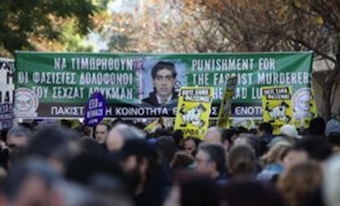 Hundreds of protesters turned out in Athens on Jan. 19 for a demonstration against rising assaults on immigrants and the murder of a young Pakistani man in which two Greek men have been arrested.
The rally was filled mostly with migrant workers from Pakistan angry over increasing attacks on immigrants, some of which have been blamed on the neo-Nazi Golden Dawn party, which has denied the charges.
Police said that Shehzad Luqman, 27, a Pakistani migrant worker, was stabbed to death by two men on a motorcycle as he rode his bicycle to work in an Athens suburb in the early hours of Jan. 16 and that the attack may have been racially motivated.
“Perhaps his murder will bring hope that these attacks will stop. We are protesting for the government to take measures to stop racist attacks,” Javied Aslam, head of the Pakistani Community organization told Reuters, as about 300 Pakistani immigrants gathered outside city hall with a symbolic coffin.
A police official told Reuters that both suspects had admitted to stabbing Luqman in the chest following a drunken argument. About 3,000 immigrants and human rights activists later gathered in the city’s central Omonia square to demonstrate against racism, holding banners reading “Neo-Nazis out” and “Punishment for the fascist murderers of Shehzad Luqman”.
“I have been the victim of a racist attack and when I tried to complain about it I was arrested. Police are the same as Nazis,” 35-year-old Gildas Batola from Congo told Agence-France-Presse at the rally organized by groups including municipalities, migrant communities and the major opposition party Coalition of the Radical Left (SYRIZA).
Protesters carried banners reading: Fascism Never Again and End to Racist Attacks. International human rights groups have warned of a surge in xenophobic attacks on migrants in Greece, where economic hardship and a sixth year of recession have fueled the rise of extremists who are soaring in popularity. Amnesty International said Luqman’s killing was not an isolated incident but showed a “continuing failure” of the Greek authorities to take action to put an end to racist violence.