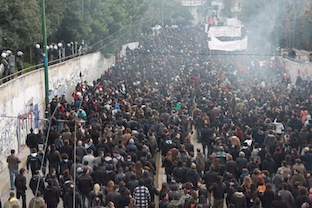 Thousands of Greek anarchists marched through central Athens on Jan. 12 to protest the arraignment of nearly 92 people who were arrested after trying to reoccupy a long-term squat evacuated by police last week.
The crowd, estimated at 3,000 by police and 8,000 by organizers, marched to the Athens law courts where the squatters were arraigned and started to disperse when authorities began to release the arraigned individuals. All 92 have been provisionally released and a later court date will be set, where they will appear on charges of trespassing on public property.
Unusuay for an anarchist march, it ended virtually without incident, despite the close presence of riot police. Earlier in the day, police were seen at subway station entrances quietly searching, and apprehending individuals under suspicion of carrying rocks, batons and other projectiles.
The squatters were arrested at the abandoned building known as Villa Amalia in what critics said was an attempt by the government to divert attention from the country’s crushing economic crisis and the implementation of new austerity measures pushing more pay cuts, tax hikes and slashed pensions on workers, pensioners and the poor.