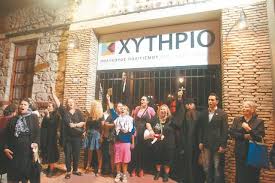 The public prosecutor’s office in Athens has charged the organizers, producers and cast of the play Corpus Christi with blasphemy following a lawsuit filed by Bishop Seraphim of Piraeus.
Directed by Albanian-born Laertis Vasiliou, Terrence McNally’s play had been staged at the Hytirio Theater in down town Athens. The play dramatizes the story of Christ and the Apostles as gay and living in Texas.
Protests by members of far-right Golden Dawn and religious groups had cancelled the play’s Athenian premiere on two occasions, before the production had been pulled down entirely following more reaction from extreme nationalist and religious groups.
“It was not our intention to provoke ‘religious sentiment’ or to create tensions,” noted the play’s organizers in a statement following the end of the performances. The work is that of American playwright and has triggered protests before. Greece is invoking a rarely-used law to go after the cast, crew and producers.
According to the newspaper Ta Nea, Bishop Seraphim was accompanied to court by members of the Golden Dawn party. Meanwhile, there has been no prosecution of protesters who were seen on video attacking a journalist during a protest outside the theater last month. One of those arrested was taken off a police bus by a Golden Dawn member while police allowed it.
Critics have likened the attacks on the play to the prosecution of the Russian punk rock band Pussy Riot for staging an anti-Kremlin protest in Moscow’s main cathedral, said to have been politically motivated.