GRNews
GreekReporter.comLifeeventsBill Clinton: "There is Nothing Wrong with Greece - Issue Bonds"

Bill Clinton: "There is Nothing Wrong with Greece – Issue Bonds" 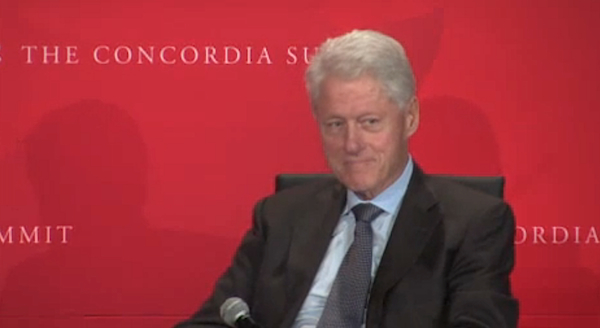 Bill Clinton offers support to crisis-hit Greece from the podium of the second Annual Concordia Summit. The former US President notes that “there is no problem with Greece and that Greek people work 25% more hours than the Germans.” Since Germany is not willing to issue Euro-bonds to help Greece, Clinton suggests a non-tradable Greek bond program similar to the one that the U.S and Israel have had in the past.

Addressing an esteemed audience of of world leaders and business executives as the keynote speaker for the second Annual Concordia Summit, former U.S. President Bill Clinton, spoke about current world issues and how public-private partnerships can lead us to a brighter future. The former president was introduced to the audience with a warm speech by Libra Group CEO George Logothetis.

The summit, which attracted a diverse and experienced group of former and current corporate and government leaders, examined how public-private partnerships can help address challenges relating to Global Security, the Economy, Education, Environmental Sustainability and Health around the world.

Bill Clinton also talked passionately about Greece and his recent trip to the crisis-hit country after Nicholas Logothetis, a Greek of diaspora and one of the co-founders of the non-profit organization, asked him how optimism can be used as a force in Greece and how Greeks become so successful outside of their homeland, referring to the million Greeks of Diaspora who thrive around the world.

“There are a lot of people who have governments and systems that are not worthy of them. The basic case for optimism is that intelligence and the willingness to work hard are evenly distributed throughout the world. Technology is democratizing it and empowering people to access it. And of all the mega problems we have they are all achievable at an affordable price and largely for a profit if we could organize ourselves, everybody knows what the case is for negativism,” said Bill Clinton.

The former U.S. President stressed the fact that contrary to stereotypes the Greeks are very hardworking.

“If you just take Greece, the average Greek didn’t even know until everybody started talking about it that he or she worked 25% more hours per week than the average German, did you know that? In other words there is nothing wrong with Greece, the people are smart. There is a reason that they basically were the founder-heads of so much western philosophy and culture.”

According to Clinton the problem of Greece is the inability to collect taxes, something that could not support the heavy social benefits and high pensions that the country had until a few years ago.

“They have had for many years a social organizational system that provided a lot of government benefits including very heavy pension obligations with a tax system that did not collect the taxes that the law said were owed and they were able to kick the can down the road.”

Clinton who visited Greece this summer did not forget to praise the Greek people for the sacrifices that have made to avoid bankruptcy and a Euro-exit.

“Greece is a special case that, if you can make a compelling argument, I think that in the short term anyway the Irish and the British and maybe the Spanish with 25% unemployment, have had a little bit too much short term austerity for macroeconomic problems. The problem is that the Greek system became so disfunctional they had to start trying to clean it up back in 2009. For people who believe they have not done anything, they have started working on this since 2009 and you may say it’s not enough but each step was a shock to the collective system as you know.”

Clinton believes that Greece should stay in the Euro, but on the other hand Greek people need to find their lost hopes.

“As you know I have urged this committee of Greek Diaspora that they asked me what to do. I believe it is to find ways to give Greek people something to look forward to when they get up in the morning. They will have to do what they have to do to stay in the Euro and to keep the Euro afloat.”

“I do believe it would have been far better if the Germans who have, contrary to the public perception, they have been exceedingly generous in giving money to preserving the Euro, but the problem is, it isn’t popular in Germany. And no-one has explained to the Germans how they kept their incomes going up and unemployment low by the Euro letting the Greeks the Spanish the Portuguese and everybody else borrowing money at German interest rates so they can buy German products.”

“So the average German factory worker thinks hera I am working hard paying high taxes while they are spending my money to bailout these people who couldn;t take care of their own affairs, in other words we know only the one side of the story.”

“So, poor Chancellor Merkel with her coalition government has not been able to get the aid down there quickly enough to set some of it aside in Euro-bonds to put people to work now even as you are bringing down the government debt over the long run.”

The former President repeated that bonds can help Greece now, something that had suggested to members of the Greek diaspora at the Hellenic Initiative conference in Athens last summer.

“Since they [Germans] can’t do it my opinion is for whatever it’s worth is that we should organize the Greek Diaspora to do it and set up Greek bonds, not trade-able bonds, more like savings bonds in the US. With over two million Greeks just in the U.S, I think we need a Greek bond program. A better model is Israel, Israel was not a rich country when it started out and the Israeli development bonds played a huge role in starting certain critical programs.”

“I just think that any diaspora that has a problem at home that can’t be fixed overnight – you can say all you want about how well you can take time to fix this stuff – but there are millions of Greeks that they need something to look forward to when they get up tomorrow morning and their children need to believe in the future of their country so they don’t think they have to leave to make a living. That’s why I wanted to do these bonds if you look at what they did fore the israelis, what they did for American children after the WWII, they mad e a huge difference because so many of them were sold you also need to find a way for Greeks with lower incomes than you have to participate in this program. So the Greeks will feel that the world and their brothers and sisters are supporting them,” said Clinton urging many Greeks of diaspora who were in the audience to push for such a program.

“I am all for continuing the pressure on Greece to continue to make the structural reforms but you just need to know you need to know, the average Greek is working 25% more hours a week than the average German. They are doing everything they know to do and they feel they are getting the living daylights beat out of them every single day. We need to have something that throws a lifeline out there, that shows there is going to be a better tomorrow,” President Clinton concluded.

You can watch the full Q&A with President Clinton below:

During the event that attracted many government officials and businessmen from all over the world, Clinton also spoke about the need for America to ease immigration policies and allow more qualified individuals to come to the country.

He noted that after the 9/11 attacks the U.S. had an understandable reaction, but it was an overreaction to what happened, and America lost a lot of bright young people who wanted to come to America and study.

“This is one issue that President George W. Bush, and I, and President Obama, we all agreed on and we all failed. We have this in common. The reason is that there were always enough people who were afraid and did not understand the economics of immigration. I think we need to go back and make a case.”