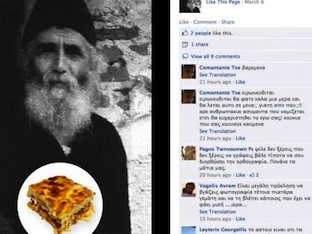 A  27-year-old man was arrested in Greece for alleged blasphemy against a famous Greek monk, Elder Paisios, after pressure was applied by the ultra-religious neo-Nazi Golden Dawn party that has 18 Members of Parliament, Business Insider reported.
Paisios, an Orthodox monk from Cappadocia who died in 1994, was highly venerated in Greece and Russia, and formal canonization as saint in the near future has been speculated. The unnamed suspect set up a Facebook page using the mocking name Geron Pastitsios, which is a Greek pasta dish.
The arrest was agitated by the ultra-nationalist Golden Dawn party, which is heavily supported by the police, according to some Twitter users. “The issue was raised in the Parliament by the Neo- Nazi group Golden Dawn, after which the police was mobilized,” claimed Stratos Safioleas, International Media Adviser at PyeongChang2018.
“The cyber crime spotted recently in (…) Facebook a page (www.facebook.com/gerontas.pastitsios) which contained blasphemies and insults against Elder Paisios and Orthodox Christianity,” read a press release from the police’s cybercrime unit, claiming police received thousands of complaints about the page from people all over the world. The cybercrime unit took the page offline and seized Evia’s laptop, before arresting him.
Three articles of the Greek Penal Code punishes whoever “by any means blasphemes God.” Article 199 states that “who publicly and maliciously and by any means blasphemes the Greek Orthodox Church” shall be punished “by imprisonment for not more than two years.” In 2003, an Austrian writer, Gerhard Haderer, was prosecuted for his book The Life of Jesus, which reportedly portrayed Jesus as a hippie. He was acquitted in 2005. The Greek Orthodox Church is the official state church for Greece.
Last week, Muslims in Greece protested an American-made film it said blasphemes the Prophet Mohammad and the head of the Muslim Association of Greece said Prime Minister Antonis Samaras was a racist because he has failed to provide a mosque for Islam’s followers.