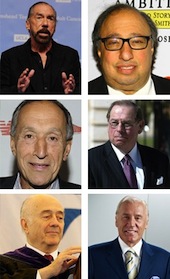 Greek-American success stories are well known, and now six have landed on the Forbes magazine annual list of the 400 richest Americans. First among them is the Greek-Italian John-Paul Dejoria, at 92nd, with $4 billion. He is 68, married with four children and most of his money comes from his company John Paul Mitchell Systems, producing hair-styling products.

At 132nd, from the island of Nisiros, is New York supermarket  mogul John Katsimatides with $3 billion. His fortune comes from his Red Apple Group company, which controls numerous markets, and he also has income from energy investments.

Jim Davis, the owner of the Boston running shoe company New Balance has $2.1 billion and ranks 239th. At 250th is pharmaceuticals giant Michael Jaharis with $1.9 billion, whose Kos brand name is one of the best known in the business. He is tied with California real estate businessman George Argyros.

At 360th with $1.2 billion is Connecticut businessman Dean Mitropoulos, known as the “Acquisition King” for his ability to gobble up lucrative companies, including Pabst Blue Ribbon Beer, which has become a cult brand for many young Americans.