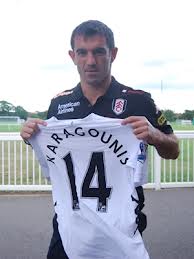 Giorgos Karagounis, a former player for the Greek football team Panathinaikos, will play for the British Fulham, as GreekReporter reported earlier this week. The 35-year-old captain of the Greece national team  joins on a free transfer, having been without a club since his contract with Panathinaikos ended earlier this year.

Fulham said it had signed him to a deal through the end of the season. He has made 120 appearances with the Greek national team, including as a member of the 2004 squad that won the European Championship in Portugal.

Karagounis became the joint highest-capped player for Greece last June, scoring the only goal against Russia to put Greece in the quarter-finals of Euro 2012. He made a total of 380 appearances in two five-year spells at Panathinaikos. In between his time in Athens, he spent two seasons at Internazionale and SL Benfica. Karagounis made more than 100 European (UEFA Champions League and UEFA Europa League) appearances for his clubs.

Speaking at Fulham’s Motspur Park Training Ground, Karagounis said: “I’m delighted to have signed for Fulham Football Club and I am excited by a new challenge in England and the Barclays Premier League. I’m looking forward to working under Martin Jol and playing alongside some fantastic players at this Club.”

Fulham Manager Martin Jol added: “Giorgos Karagounis has a wealth of club and international experience and I’m happy that he’s joined us for this season. He’s been an influential player for his club sides and is a renowned player in world football as he’s about to become the most-capped player for Greece. He brings many certain qualities to our squad.”