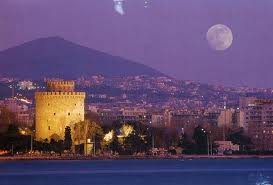 According to National Geographic magazine, the northern Greek city of Thessaloniki is among the top international destinations that travellers should visit in 2013.
The famous travel magazine, which has over eight million readers worldwide, is about to release its annual travel guide for the year 2013, including Thessaloniki in the ‘Do Not Miss’ destinations.
The official announcement will not be made until October 2012 but on July 9, Mayor of Thessaloniki Yiannis Boutaris informed the city council about this pleasant development.
Over the past months, city council along with various organizations have made significant efforts to promote Thessaloniki abroad. The northern Greek city is also a candidate for the European Youth Capital 2014.
Last year, the annual publication of Louis Vuitton City Guide: European Cities included Thessaloniki in its list of cities that are less known but offer great travel experiences. Moreover, the New York Times as well the Australian Sun Herald suggested their readers to visit Thessaloniki as well in the same year.