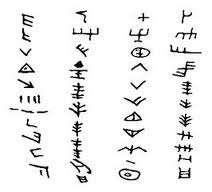 Back in 1993, in a Neolithic lakeshore settlement that occupied an artificial island near the modern village of Dispilio on Lake Kastoria in the Kastoria Prefecture, professor George Hourmouziadis and his team unearthed the Dispilio Tablet (also known as the Dispilio Scripture or the Dispilio Disk), a wooden tablet bearing inscribed markings (charagmata) that has been carbon 14-dated to about 7300 BP (5260 BC).
In February 2004, during the announcement of the Tablet’s discovery to the world, Hourmouziadis claimed that the text with the markings could not be easily publicized because it would ultimately change the current historical background concerning the origins of writing and articulate speech depicted with letters instead of ideograms within the borders of the ancient Greek world and by extension, the broader European one.
According to the Professor of Prehistoric Archaeology at the Aristotle University of Thessaloniki, the markings suggested that the current theory proposing that the ancient Greeks received their alphabet from the ancient civilizations of the Middle East (Babylonians, Sumerians and Phoenicians etc) fails to close the historic gap of some 4,000 years. This gap translates into the following facts:  while ancient eastern civilizations would use ideograms to express themselves, the ancient Greeks were using syllables in a similar manner like we use today.

The currently accepted historic theory taught around the world suggests that the ancient Greeks learned to write around 800 BC from the Phoenicians. However, a question emerges among scholars: how is it possible for the Greek language to have 800,000 word entries, ranking first among all known languages in the world, while the second next has only 250,000 word entries? How is it possible for the Homeric Poems to have been produced at about 800 BC, which is just when the ancient Greeks learned to write? It would be impossible for the ancient Greeks to write these poetic works without having had a history of writing of at least 10,000 years back, according to a US linguistic research.
The tablet is 2,000 years older than the written findings from the Sumerian era and 4,000 years older than the Cretan-Mycenean linear types of writing.
According to Hourmouziadis’ statements back in 1994, the markings on the tablet did not resemble the human figures, the sun and moon or other figures ideograms usually depict. They actually showed signs of advanced apheresis, which indicates they are the result of cognitive processes.
The tablet was partially damaged when it was exposed to the oxygen-rich environment outside of the mud and water in which it was immersed for a long period of time, and it is now under conservation. The full academic publication of the tablet apparently awaits the completion of the work of conservation.