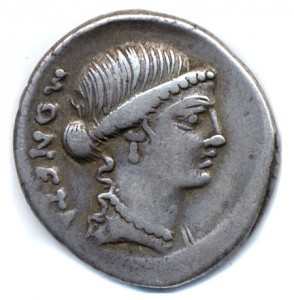 Three new words for you today:

The word Money comes from the Latin Moneta. The goddess Moneta was created under the influence of Mnemosyne (Gr: Μνημοσύνη;), The only other name for Godess Hera (Gr: Ήρα; Latin: Juno;) the goddess of memory, Zeus wife and the mother of the Muses. The goddess’s name is derived from Latin monēre (which means to remind, warn, or instruct). Outside the temple of Hera in Rome was the mint and the coins had Hera’s face on them (monetae) before the Roman Caesars and Emperors decided to put their own.

Until next time, with more words originated from ancient Greek.