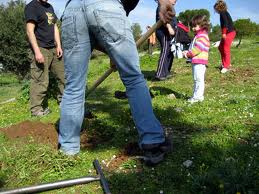 Greek-American “Plant your roots in Greece” is a non-profit foundation which contributes to planting saplings in Greece. Their new goal was to plant trees on Thassos island to help the island forget the wildfires of 1990-1991, which destroyed the green parts in the southern area.
“In Thassos, there is great need for reforestation,” says Deputy Mayor of the Municipality of Thassos Michael Xognos, who organized this environmental action. “In several parts of our island, fires of 1990-91 destroyed everything,” he adds.
The Municipality of Thassos, in collaboration with the Chicago-based Greek American Foundation, undertook the reforestation and planted 4,000 saplings of black pine trees in some regions of the island. Such an area is Pefkari, where the state officials have constructed a scenic pedestrian area. Many toursists and locals visit this area and many more are expected to walk through it.
Local students participated in the tree planting process. “Local communities, through collaboration and solidarity, must stay active,” admitted Xognos.
“With great pleasure, we cooperated with the Greek-American Foundation and we should thank its President, Theodoros Spyropoulos. I consider such activities to be very positive, because they encourage societies to volunteer,” concluded the Thassos representative.
The Foundation also granted $10,000 to the special needs of Thassos-based schools.