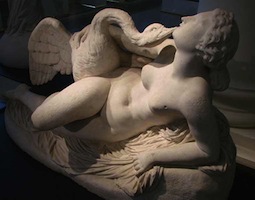 A Greek mythical image of Leda and the Swan had to be removed from the Scream Gallery in Mayfair where it was exhibited after a Metropolitan police officer complained that the artwork condoned bestiality.
The image was exhibited in the art gallery for almost a month without any complaints from visitors and the public.
It was only when the Metropolitan police officer spotted the photograph from a bus that things took a different turn.

The officer immediately alerted his colleagues and two officers arrived at the gallery asking the painting to be removed.
“We asked them what the problem was and they said it suggested we condoned bestiality, which they said was an arrestable offence. The show, Metamorphosis, had been running for a month and was really well received,” the London Evening Standard quoted Jag Mehta, sales director at the gallery, as saying.
According to Jamie Wood, owner of the gallery and son of Rolling Stone’s Ronnie Wood, the image titled “A Fool for Love” was not aimed to deliberately shock onlookers or trigger a controversy.
“We would of course have fought to keep the piece up otherwise. If anyone wants to view it, we still have it at the gallery. The purpose of art is to provoke debate and Derrick’s piece has certainly done that,” Wood told the Telegraph.

The subject of Leda and the Swan has intrigued historians and artists through the years. As per Greek mythology, Lord Zeus took the form of a swan to seduce Leda. Legends further have it that Leda later bore the children of Zeus, Helen and Polydeuces.
This subject was widely explored by many artists through the years including Leonardo Da Vinci, Correggio and Cesare Sesto.

Sales director Mehta further said that the myth of Leda’s rape by Zeus was an acceptable form of erotica in Victorian times. However, this argument failed to impress the police.
“They said they didn’t know anything about the myth,” the Telegraph quoted Mehta as saying. “They asked if we had had any complaints and we said quite the contrary. Lots of people were intrigued by it.”
(source: IB Times)