GRNews
GreekReporter.comHollywoodDenise Vasi: From New York to Hollywood to Greece

Denise Vasi: From New York to Hollywood to Greece

At first glance, you may not guess that one of the stars of VH1’s “Single Ladies,” Denise Vasi, is part Greek, but when describing her features – piercing blue eyes, smooth complexion and model-esque frame – she has all the makings of a Goddess.

At the age of 12, a family friend sent a few photos of Vasi to famed agency Ford Models, and it was all uphill from there. She went on to appear in magazines like ELLE, Marie Claire, and GQ Italy, and in numerous print campaigns as well as music videos. Naturally, she made the transition into acting a few years later, landing a steady role on the American soap opera, “All My Children.”

Vasi grew up in Brooklyn, NY. Her father is of Dominican descent, her mother Puerto Rican-Greek. After her parents separated, Vasi was raised by her mother’s side of the family. Her family embraced both heritages, and Vasi enjoyed the benefits of living in a household filled with culture.

“The food is all half and half: rice and beans, and feta, and olives and lamb,” she says, adding, “we celebrate Greek Easter, and Christmas, and all the major holidays are celebrated Greek Orthodox.”

Her maternal grandparents emigrated to the US; her grandfather from Kalamata and her grandmother from Puerto Rico. Neither spoke English, but they met, fell in love, and learned the language together. After my “oohs” and “aahs” of her telling the story, she says, “yeah, super sweet. Makes you not want to settle for anything not as romantic as that.”

Vasi doesn’t speak Spanish or Greek very fluently, but she admits she speaks “Diner Greek…I can get by at a Diner.” She points out emphatically that her favorite dish is pasticho, and knows some good authentic Greek restaurants in Bayridge, Brooklyn. 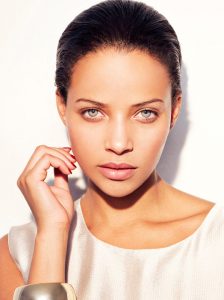 While working on “All My Children,” the show decided to move filming locations from her native New York to Los Angeles. It was a tough decision as to whether she was willing to take a leap of faith and move over 2,500 miles away from her closest friends and family.

Worried about whether she’d be able to handle the lifestyle changes between New York and Hollywood – like being able to take a train vs. being able to drive, or meeting new friends, she states that “it was really scary initially,” continuing, “I’m like every other Greek – family oriented, sticking together…if I wanted a home cooked meal, I could just hop on the subway.”

But she says the decision to switch coasts was well worth it. “I knew if I wanted to pursue [acting] seriously, I’d have to go [to Hollywood] at some point,” Vasi adds. “There’s so much I’m so thankful for from ‘All My Children,’ but it just pushed me to jump.”

Unfortunately, after much fan backlash, the popular American soap opera, along with a few others, was cancelled by its broadcast station this past year to make way for new programs. That didn’t stop her career from moving forward, though. Cast in the television show “Single Ladies” on VH1, she found herself packing her bags once again…this time to head back to the US East Coast and the city of Atlanta. Working 15-16 hour days, Vasi says it’s a bit of a change from learning a new script everyday for a soap opera, to a show where there are only three main characters and having more material to work with. As far as her new living adjustment goes, she says with a smile that the people in Atlanta are “super friendly, and the shopping is great.”

With a busy schedule, Vasi makes time to work with the charity organization Caron Renaissance, a leading rehab center in the US that specializes in alternative and dual diagnosis rehab. She co-chairs and produces events with a friend, which have raised more than $500,000 in the last three years for individuals in treatment.

Now, Vasi is looking forward to a summer vacation…in Greece. She says she’s “excited” to do some island hopping with her boyfriend and a close group of friends for three weeks, and is hoping to be able to relax and enjoy it.

When she returns, it’s back to work for the stunning actress. However, she’s not ruling out adding more to her plate, like being on a movie set, because as she points out, “Everybody wants to do films. But you know, no pressure. I take the blessings as they come.”