Greek-Australian of The Century Dr. Archie Kalokerinos Passes Away 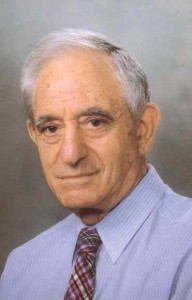 Dr. Archivides “Archie” Kalokerinos, one of the most significant figures of Australia, has passed away at the age of 84.

In 2000 he was awarded the title Greek-Australian of the Century by the Melbourne-based Greek newspaper Neos Kosmos. He holds controversial opinions on a number of medical issues. He was a supporter of Linus Pauling’s controversial theory that many diseases result from overproduction of free radicals and can accordingly be prevented or cured by Vitamin C; this led him to treat many conditions with high intravenous doses of vitamin C.

He also believed that vaccination schemes have been used for deliberate genocide (among indigenous Australians, and in spreading HIV in Africa); and that the US government systematically planned to get rid of undesirables such as criminals by encouraging people with known heart problems to be vaccinated.

Archivides Kalokerinos was born in Glenn Innes, Australia, on September 28, 1927 (he was named after the Greek hero Alcibiades, but during translation the spelling was mistaken). Kalokerinos got his MD degree from Sydney University in 1951 and then spent six years in England. On his return to Australia, he was appointed Medical Superintendent of the hospital at Collarenebri, a town 500 miles north-west of Sydney.

He was a Life Fellow of the Royal Society for Health, a Fellow of the International Academy of Preventive Medicine, Fellow of the Australasian College of Biomedical Scientists, Fellow of the Hong Kong Medical Technology Association, and a Member of the New York Academy of Sciences. In 1978 he was awarded the A.M.M. (Australian Medal of Merit) for ‘outstanding scientific research’. Dr. Kalokerinos has authored a book with profound implications for orthomolecular medicine entitled ‘Every Second Child’, as well as many scientific papers. He was also author of two books on the subject of opal, on which he is considered to be an international authority. He was also the Honorary Medical Advisor for Aboriginal Health.

Kalokerinos became very concerned about the high death rate of Aboriginal children in part of New South Wales. He came to the conclusion that the infants had symptoms of scurvy, a deficiency of vitamin C, and he treated them accordingly. The double Nobel prize winner Linus Pauling, in the foreword to Kalokerinos’ book Every Second Child, endorsed Dr. Kalokerinos’ views.