GRNews
GreekReporter.comLifeeventsSearching for Women on Mt. Athos: Insights from the Archives of the...

Searching for Women on Mt. Athos: Insights from the Archives of the Holy Mountain 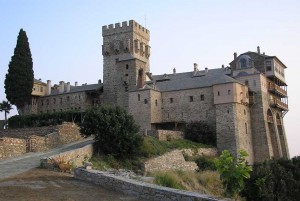 By Ingka Athanasiadou
It is ironic that one can find so much information about the lives of Byzantine women in the archives of Mount Athos, a holy mountain to which access has always been denied to members of the female sex.
Although with few exceptions women never set foot on the Athonite peninsula, the archives preserved on the Holy Mountain reveal that women had many kinds of contact with its monasteries. In these documents we are introduced to a wide variety of women, most of them property owners, who either sold or donated their properties to Athonite monasteries.
The documents reveal important insights about women’s legal and economic status, especially their rights to their dowry. We also learn that many women were inspired by their religious faith to make donations to Athos in exchange for the prayers of the monks for their salvation in commemorative services. Although they were prevented from visiting the monasteries in person, these women gained great solace from the confidence that the monks would be powerful intercessors for their souls.
Alice-Mary Talbot received her BA in Classics from Radcliffe College and the MA and Ph.D. in Byzantine and Ottoman History from Columbia University. After teaching at several colleges in Ohio, she spent the rest of her career as a project director and administrator at Dumbarton Oaks. She served as Executive Editor of the Oxford Dictionary of Byzantium, published in 1991, and as co-director of the Dumbarton Oaks Hagiography Database project from 1991 to 1997. From 1997 to 2009 she was Director of Byzantine Studies and editor of Dumbarton Oaks Papers.
After her retirement she became the editor of the Greek series of the recently launched Dumbarton Oaks Medieval Library. She is currently president of the Medieval Academy of America. Dr. Talbot’s primary research interests are in the fields of hagiography, monasticism and gender studies, and she has focused much of her attention on the edition and translation of Byzantine texts.
February 14, 2012 19:00
Searching for Women on Mt. Athos: Insights from the Archives of the Holy Mountain
LECTURE
Alice-Mary Talbot, Director of Byzantine Studies Emerita, Dumbarton Oaks
(Source:http://www.ascsa.edu.gr/)